Alaska – You can’t have your kayak and heat it.

I was stood, rooted to the spot, holding a kayak under one arm and a dry bag full of my possessions under the other. The news that my ferry had just been cancelled was slowly sinking in.

The dream was to spend 5 days in the wilderness, sheltering in this incredibly minimal (and dare I say cute) little cabin on the tiny Alaskan island of Killisnoo. 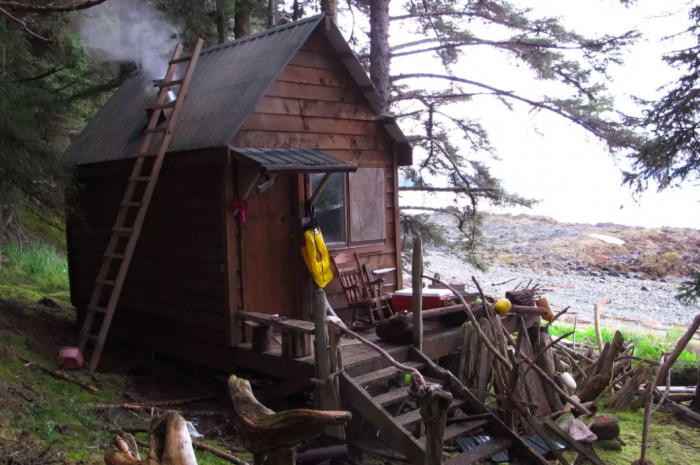 Killisnoo was formerly inhabited by the indigenous Tlingit people. A fish processing plant was built on the island in the late 1800’s causing the population to soar. This sadly burned down in 1928 and the majority of the Tlingit people left.

The population rose again in 1942 but under very different circumstances. The US Government were getting concerned about Japanese aggression in the Aleutian Islands. In response, the residents of these islands were evacuated and relocated to places such as Killisnoo. They were given little support. Not even the most basic human needs of shelter, water and food were met. They were dumped and left to survive. Some did, many did not.

Today the island is home to a Fishing Lodge and a small number of private properties.

Attempting to schedule this adventure prior to leaving the UK had proven to be excruciatingly difficult. The process was almost aborted several times. However, it was the start of my year-long sabbatical and I wanted to begin with a challenge.

And a challenge it was. Even getting to Killisnoo, let alone surviving and thriving for 5 days, was a bit of a bind. The only affordable option was via kayak. I’d kayaked before, but that was on a nice summer afternoon in Surrey. I anticipated the whale filled waterways of Alaska’s Inner Passage would be a little more tricky.

Hours of investigation resulted in the discovery that the nearest kayak hire shop was a 7-hour ferry journey away in Juneau. I’d have to get the kayak in Juneau, load it onto a ferry, disembark at Angoon and then paddle the short distance across to Killisnoo. 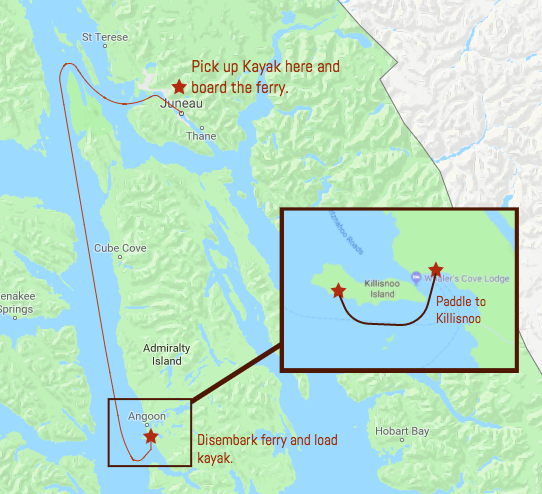 So, it was physically possible for me to get there, now I had to figure out if it was logistically possible. The availabilities of ferry, cabin and my personal schedule meant that there was only one potential window for this trip to take place. I paused for a brief moment, thinking about the remoteness, the solitude. Is this right for me? Only one way to find out. I jumped on it and booked it up. All the other details could be figured out on arrival.

On the morning of the ferry, having survived a night in my first (and by far worst) Airbnb of the trip, excitement levels were building. Basic rations were packed along with some fishing gear. I was hoping to add an Alaskan Salmon or two to my culinary fare in my own personal version of Deadliest Catch. Everything was safely crammed into dry sacks should the kayak capsize or take on water. I was taking the bare minimum with the remainder stowed in the Kayak Hire office.

Brimming with intrepid nervousness I walked towards the guy at the gate, ticket in hand. He was a large gent. Huge actually. Windswept facial hair and icy eyes completed the look of someone who didn’t give a shit.

“Hello” I said cheerily as I handed the grumpy brown bear of a man my ticket.

He studied it briefly before grunting “We’re not stopping in Angoon.”

“Speak to Madison in the office.” he said before turning to the next customer.

Initially, there were feelings of disbelief. What? How? I’d already checked in and had my ticket confirmed. I went to speak to Madison. It turns out that the ferry was still going to sail, it just wasn’t going to be stopping at Angoon due to a mechanical fault.

Juneau, despite being Alaska’s capital, doesn’t have road links to the rest of the state or North America.

I know what you’re thinking – “Just get the next ferry” – right? Wrong. This is Alaska, there wasn’t another ferry for 5 days. I enquired about getting a bus or taxi but Juneau, despite being Alaska’s capital, doesn’t have road links to the rest of the state or North America. I investigated planes, water taxis, and other boats. At one point I even considered launching the Kayak from Juneau and attempting to paddle the circa 80 miles myself. Deciding against this last course of action was probably one of my wiser choices potentially saving me from a Christopher McCandless-esque fate.

But it was to no avail. It was, to all intents and purposes, impossible to get there safely short of buying my own boat. I shuffled around the car park for 20 minutes or so like a toddler who’d just dropped his lolly. All that wasted planning, all the now useless gear and provisions, and all the expectation of a unique experience that was no more. I’m embarrassed to say that I considered getting on the next plane home, declaring world travel as ‘just too difficult’.

Refunds were forthcoming from the Ferry company and the Kayak Hire shop who were particularly kind. They helped me assess my options and as my venting slowly eased my demeanour improved. Thoughts on what to do next naturally started entering my head.

I decided that getting myself out of Juneau would be a good idea. Physically moving on would help with mentally moving on. With that in mind, I called Phil, an acquaintance further south, to see if the next part of my trip could be brought forward. The answer was affirmative, so after donating all the equipment I no longer needed (or could take on a flight – a fishing rod isn’t ideal carry-on luggage) to the kind people at the Kayak Hire Shop and changing my flight with Air Alaska I was on my way to the next adventure.

An hour-long flight delivered me to a Work Exchange placement on Revillagigedo Island where I’d be trading 4-5hrs labour per day for board and lodgings. Surely that would work out ok…?

Find out by reading: What I learnt playing Work Exchange Tinder in Alaska

PS If you ever find yourself in Juneau, looking for a Kayak (or other waterborne goodness) check out Alaska Boat & Kayak Shop. They showed amazing levels of helpfulness.

PPS I discovered the incredible cabin at the start of the story on Airbnb. If you’re new to Airbnb and you’d like a £25 in travel credit then follow this link. Airbnb £25 signup.