Camping near Hadrian’s wall – Were the Romans better off?

After a long drive from the Northumberland Coast, where I’d spent a day exploring its coastal castles, I arrived at the miserable and sodden Herding Hill campsite a stone’s throw from Hadrian’s Wall. As I sat in my car, waiting for a gap in the weather so that I could pitch my tent, I wondered what life must have been like here nearly 2 millennia ago when the Romans were in town.

With time ticking on and dinner options becoming fewer by the minute, I decided to bite the bullet and order a takeaway pizza (ok, two pizza’s) from the campsite office. They bake them here on site and the campers who’d been here for more than a few days made lots of nice yummy noises when I enquired as to whether they were of a decent standard.

The pizzas were popular. So popular that I had to wait patiently in my car for over an hour before they were delivered to me by a man in a golf cart. What service! Podcasts are made for times like these and I thank Joe Rogan for seeing me through my ‘hangry’ phase without too much distress. I wonder if the Romans were lucky enough to have food delivered to them for consumption in wheeled chariots?

I needed to know more, so decided that I would head to Housesteads Roman Fort in the morning to find out. First though, now that the pizza had been eaten – not both of them, one was reserved for breakfast – and the rain had stopped I had to pitch my tent and get a good nights sleep. I splashed over to the tiny strip of grass that I had been allocated to find that there wasn’t a single flat piece of land in the vicinity. Hmmmm.

I woke up cold and crumpled in a heap in the corner of my tent. After a few hours of constantly trying to avert myself from slip sliding away, tiredness must have taken over and my body gave up trying to halt the inevitable, allowing me to fall into a deep pizza induced coma.

When I woke it took me well over 2 minutes to eventually stand fully upright. The cold and damp had seeped into my bones and the unorthodox sleeping position I eventually succumbed to had done me no favours either. Surely my sleek pop-up tent and inflatable airbed were superior to what the Romans had used for shelter and comfort?

Hadrian was a Roman Emperor. He ruled for over 20 years from 117 CE, taking over from Tajan, who along with his predecessors had overseen a huge expansion of the Roman Empire. Hadrian liked to have his feet on the ground and so travelled widely in his conquered territories.

There is no sure way of knowing exactly why the wall was built where it was and why it was so incredibly fortified. However, during Hadrian’s travels, he is thought to have witnessed the Roman Army being spread overly thin. As such, with a pragmatic touch, he decided to halt progress and build a massive wall as a show of strength.

Having packed up my soggy tent and squelched back to the car, stopping off to say hello to the llamas on the way, I set off on the short drive along the B6318 to Housesteads Roman Fort. The weather may have been dubious yesterday but today it was glorious. A perfect day to explore the Roman Empire’s northernmost frontier. It was still and warm with only the occasional errant cloud in the sky.

I bought my ticket and headed out across the fields. Housesteads is located high up on the Whin Sill – a tabular layer of igneous rock. The walk took about 20 minutes and was quite steep in places. As the late-May sunshine warmed me I scuttled around the site, feeling chuffed that I’d got here early. I always find the atmosphere of major tourist attractions is in some way diminished by hordes of people, but when you are there first you are likely to have the place to yourself – even if only for a short time.

When was Hadrian’s Wall built?

Hadrian’s Wall itself was built around 122 CE and Housesteads Fort followed a couple of years later in 124 CE. Now, I haven’t visited too many Roman Forts, but my initial impression was that this one was in very good nick. Especially seeing as it has had to withstand nearly 2,000 northern winters.

I checked out the granaries which were essential for storing food. An army of thousands of soldiers had to be fed and it was a significant undertaking. The Romans went to great levels of sophistication to ensure their grain and other essentials stayed dry and free from vermin. The granaries had large buttressed walls with air vents, overhanging roofs to keep rain off the walls and raised floors. Food was serious business and it sounds like, when they were stationary, they ate very well. Possibly better than my, albeit delicious, pizza in a car. 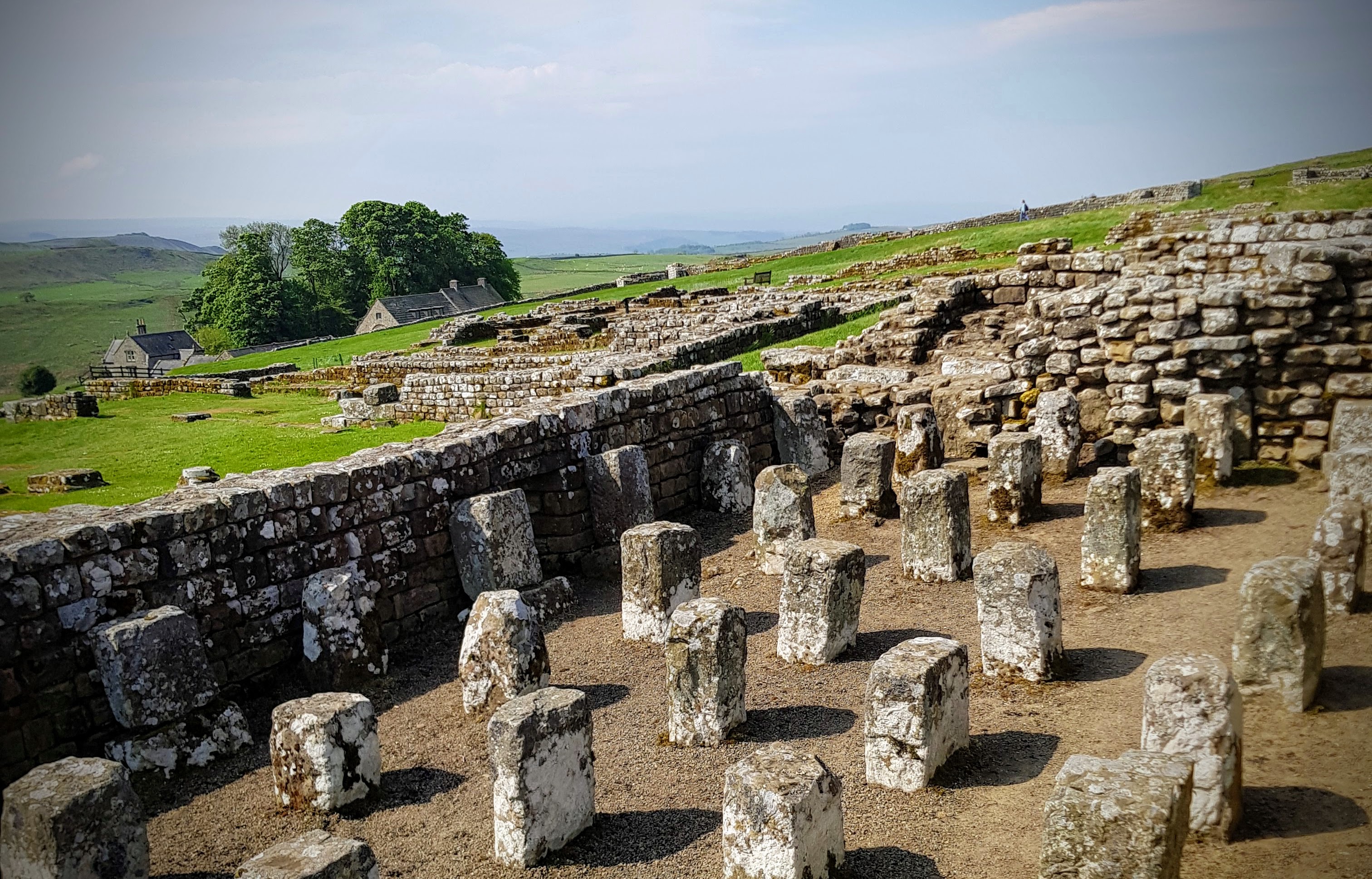 OK, so they ate well, what about sleeping arrangements? The answer to that question would be found further along at the barracks. Long buildings with shared accommodation and bunk beds to rest their heads after a long day building the wall. At around 300 CE the original barracks were remodelled into individual chalets. Chalets?! Individual chalets? What is this, a holiday camp? That sounds considerably better than a wet popup tent on a slope. 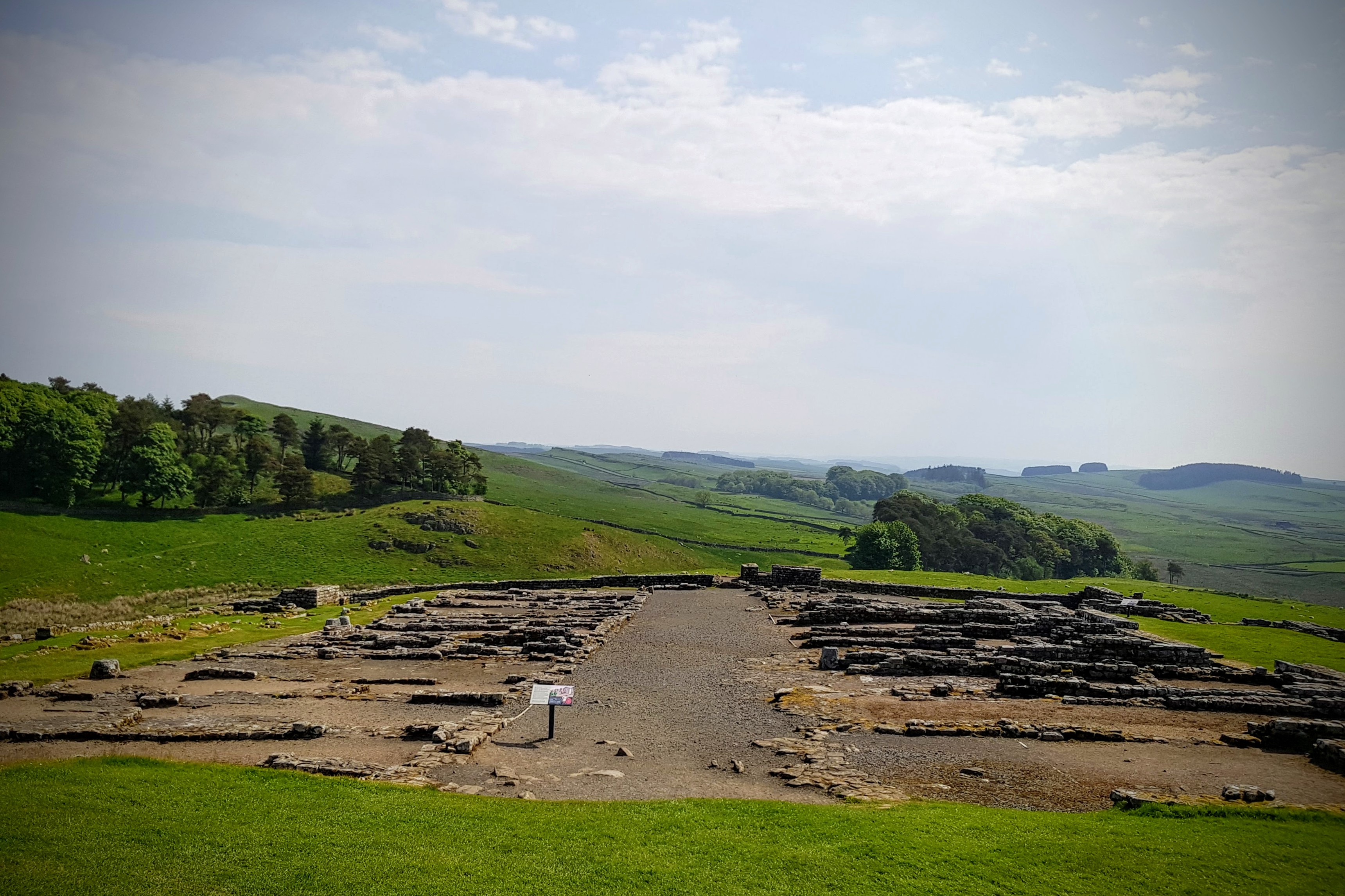 From my investigations so far, it seemed that the humble Roman soldier had a pretty decent life here at Housesteads, they ate well and had cosy accommodation, but what about the Commanding Officer? Well, firstly, this individual would have been a nobleman and as such a rich and powerful man. It, therefore, came as no surprise when I saw The Praetorium, a sprawling house over several floors and layers which looked south over England. It had a central courtyard in the Mediterranean style but here it was useful to keep out the wind, rain and snow rather than keeping people cool from the sun.

The Praetorium also had several other features to keep the Commanding Officer comfortable. Firstly and most importantly, they had toilets. You can still see where the toilet was today and where the drainage washed waste down the hill. It was relative comfort but I can’t imagine the man in charge spent too much time here reading his Latin literature.

I had now fully reheated since my morning shivers, but that didn’t lessen the blow when I found out that The Praetorium had benefitted from underfloor heating. What would I have done for that last night? The Romans had built a system where a large fire would circulate hot air through channels left under the floor in order to heat the main rooms. 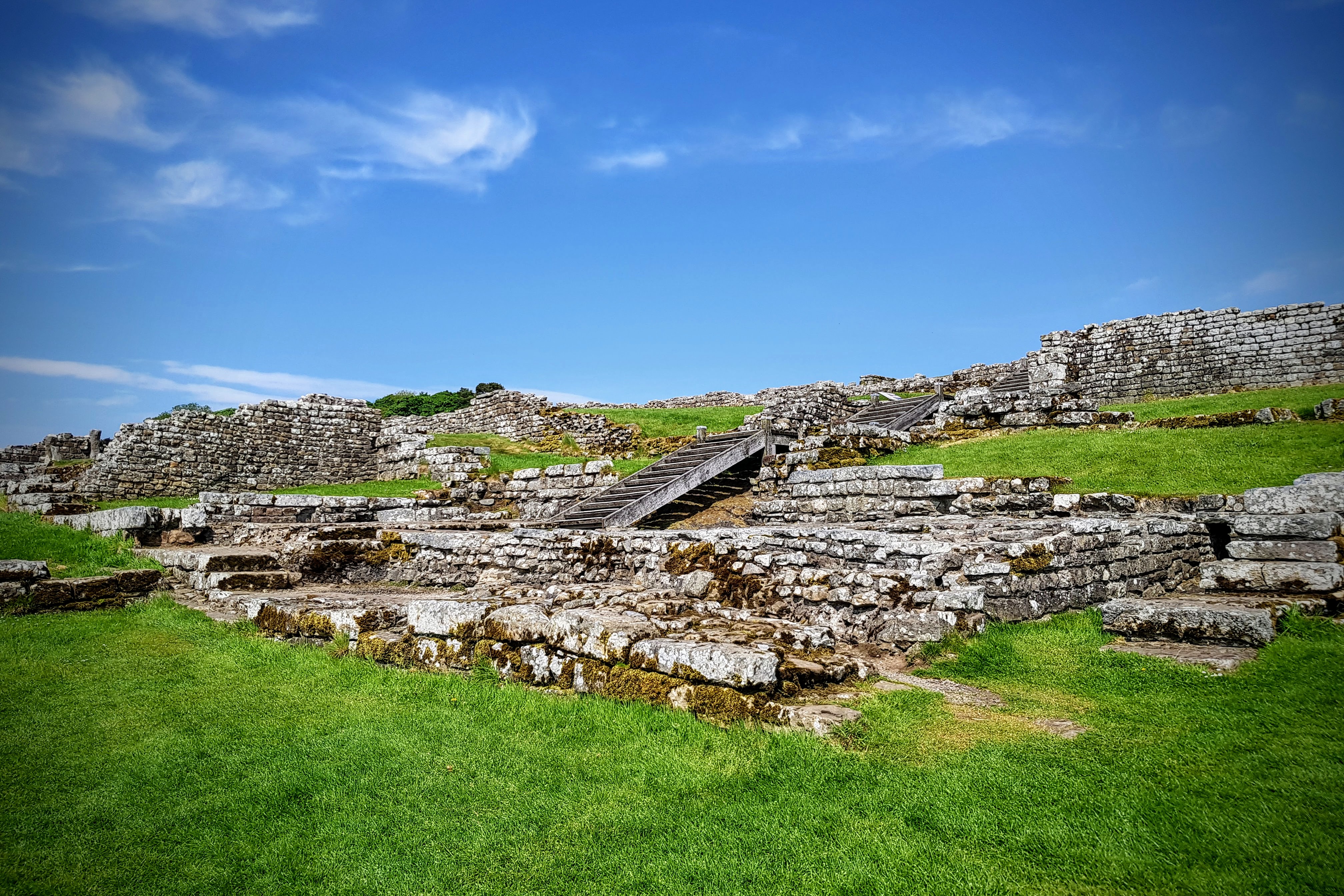 From here I took a walk along the wall itself. I was immediately reminded of my walks to school along Princess Elizabeth Way in Cheltenham, where I would routinely tightrope along the short walls that separated the pavement from the grass. To this day, my urge to walk along walls when I see them is very strong.

The views in all directions on this crisp clear day were well worth the walk. It’s the only way to get a true idea of how huge this building project was. 80 miles from coast to coast with an extra 70 miles of coastal defences. The wall was as high as 6 metres in places and was home to 20,000 soldiers. It’s astounding that anyone could have the vision, let alone the expertise to build it.

From the wall here, just west of Housesteads there is a magical sight of the wall, stretching out along the Whin Sill for miles.

Now that the main site was filling up with group tours, I slipped into the museum to have a look at the displays that explained the history and showcased a large number of Roman artefacts. The film in the cinema room also did a terrific job of transporting me back to Roman times. I have to say I felt quite comfortable there, certainly more comfortable than I was when I woke that morning.

“Walking the Hadrian’s Wall Path, an 80-mile-long trail running coast-to-coast across England, from Wallsend in the east to Bowness-on-Solway in the west, you’ll appreciate how desperate the Romans were to keep the Scots at arm’s length. Built between AD 122 and 128, and named after the emperor who ordered it’s construction, Hadrian’s Wall was an epic feat of engineering, even by Roman standards. After each Roman mile, a guarded gateway was built into the structure.”

Whilst in the area, I also visited The Sill which is a free National Landscape Discovery Centre. The centre is probably aimed mostly at school children, but it did a great job of telling the story of the local landscapes.

Hadrian’s Wall is in The Ultimate Travelist Challenge at number 398. It’s deserving of its place in the book for the history alone. Combined with the extraordinary feat of engineering required to make the wall a reality and the fact that there is still so much that is well preserved make it an outstanding place to visit and enjoy.

Have you been to Hadrian’s Wall? What was your favourite Roman Fort?