Grouse Mountain towers over the North Vancouver skyline. It has a rich history, a huge range of activities and an extreme fitness challenge. Sounds like the place for me.

The first summit of Grouse Mountain was recorded in 1894. Back then it would have been a monumental 4-day hike from Vancouver, crossing Burrard Inlet without the use of a bridge and hiking to the base without the luxury of a road.

The explorers successfully hunted Blue Grouse on the way and named the mountain after the feathered Dendragapus’. I challenge you to find an animal genus that sounds more like a children’s TV stuffed animal.

Initial investments included a cabin which was built and a proposed Mountain Railway which wasn’t. The Tyee Ski Club was founded in 1929 and shortly after the mountain had its first tow rope. The word Tyee is derived from the Coast Salish word for chief, king, or champion. They clearly had lofty ambitions and today remain proud as one of Canada’s oldest skiing clubs.

England’s most famous statesman, Winston Churchill, graced the original cabin with his presence in 1929. The first double chairlift was built in 1949 which elevated Grouse Mountain’s status to a playground for the rich and wealthy.

Today Grouse Mountain is home to year-round activities including Skiing, Snowboarding, Snowshoeing and Skating in the winter and Hiking, Ziplining and visiting the Wildlife Refuge in the summer. There is a Skyride to get you up and down and breathtaking views from the Eye of The Wind – which is a huge wind turbine with a viewing pod at the top.

However, the thing that attracted me to the mountain was The Grouse Grind. Even though it is less than 3km long The Grind is a gruelling hike. The trail rises steeply and incessantly for a total elevation gain of 853m. It’s a rite of passage for active Vancouverites.

My buddy from BC, Chuck, picked me up from Kitsilano and we took the short drive through the City and Stanley Park, across the Lions Gate Bridge and along to the base of Grouse Mountain next to Capilano Lake. We discussed tactics on the way – I was intending to put in maximum effort and get the best time I could. I wasn’t in great shape but that’s no reason not to do my best. Chuck for his part was feeling self-admittedly lazy and would treat the hike as such.

Chuck is much better at climbing hills than I am. I love going downhill, but I’m not built for the uphill sectors. Last time I was in BC, Chuck suggested we go for a moderate hike and proposed the Stawamus Chief Trail at the Sea to Sky gondola near Squamish. Sure, I said, sounds great. Chuck proceeded to scale the mountain barely breaking a bead whilst I summited a queasy, sweaty, stumbling mess. 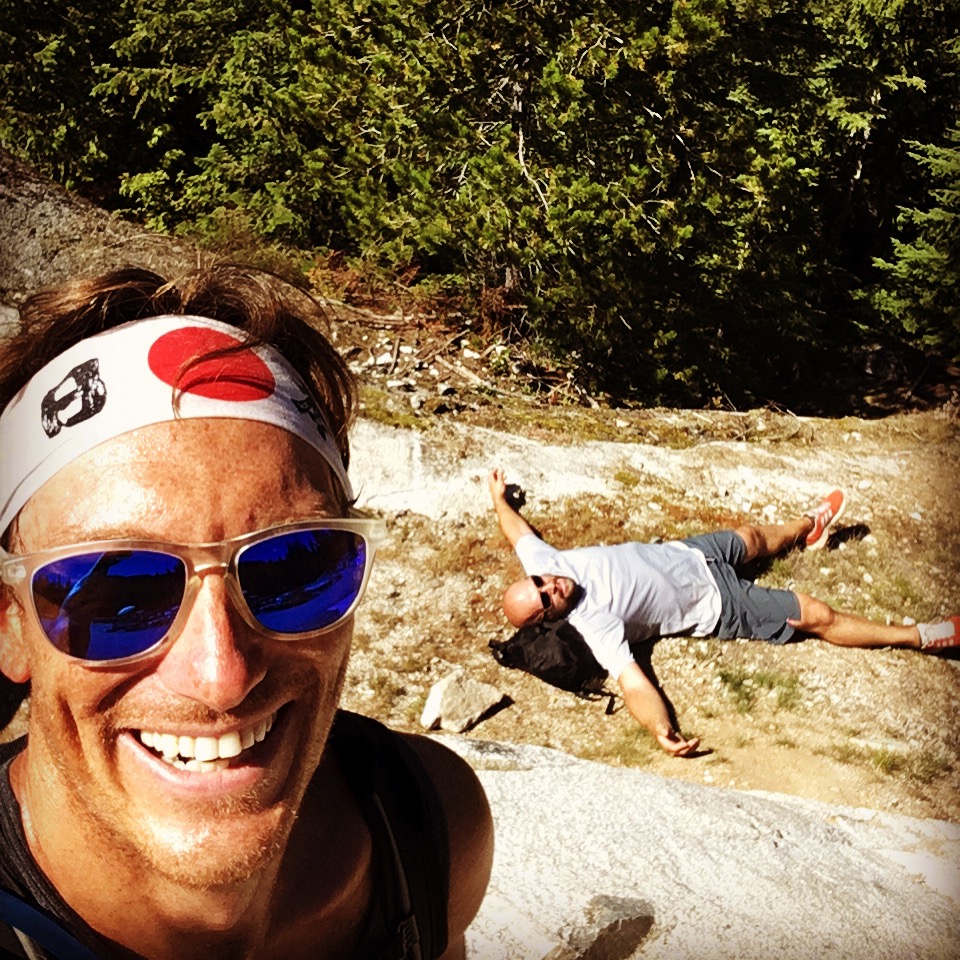 So, although our approaches to the climb were markedly different, I still expected Chuck to post the better time.

And so it played out. The ‘warm-up’ lasted all of 30ft before the trail started going straight uphill. The early steps were enjoyed with some idle chit-chat about this and that, then conversation slowed, then I wasn’t able to talk without stopping, composing myself and thinking first.

The lower sections are built with large stones as steps linking together occasional flat stretches up until the 1/4 complete marker. This marks 1/4 of the elevation gain so is a little misleading and could be a cause for distress if you weren’t aware of this beforehand. It seems to take quite a bit of time and energy to reach this point. 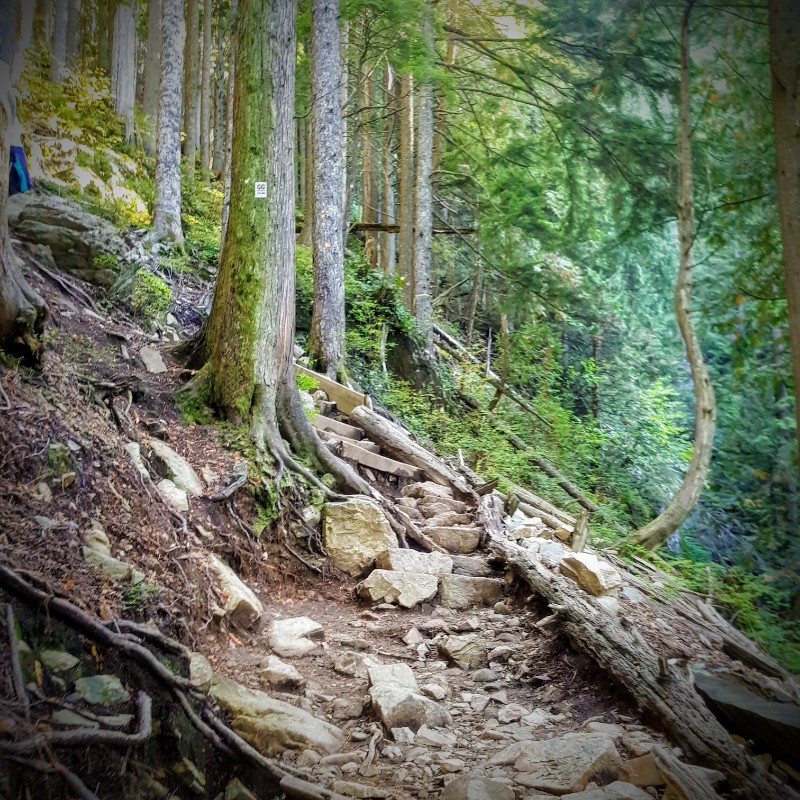 At this juncture, I was breathing hard, but feeling ok. Chuck wasn’t even out of breath. We pressed onwards, the incline getting ever more extreme. My thighs were now starting to burn and my lungs did likewise. I have a love/hate relationship with hikes like this. I find them difficult but the reward comes from completing the challenge. Right now though, all I could feel was pain and the kind of dizzy nauseousness you get when you stand up too quickly.

The halfway point came along and by now I was really feeling it. Soaked in sweat under the enclosed canopy of pine trees, I was struggling to keep going. It would have been so easy to stop and sit down but that really isn’t in my nature, so I kept the pistons pumping and continued up “Mother Nature’s Stairmaster”.

Chuck by this point had given up trying to talk to me – having not had an understandable response in over 5 minutes – and took off for the top. Good decision – I don’t enjoy feeling like I’m holding anyone up.

As the path wound higher the switch-backs became more regular. The steps constructed out of stone were replaced with wooden alternatives alongside which were some helpful handrails. Any assistance I could give my legs by pulling myself up with my arms was gleefully accepted. 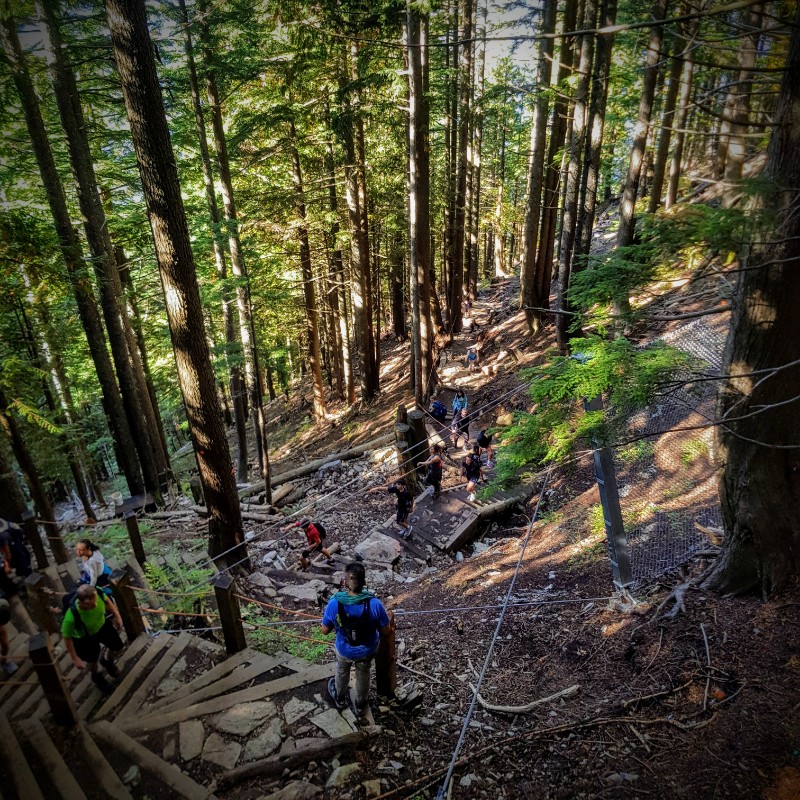 The pain was now progressing onto a whole new level of spitefulness but thankfully I reached the 3/4 mark and my spirits were raised – there wasn’t too much further to go. I tried to keep a constant pace but found myself having to stop at regular intervals to regulate my breathing.

Chuck had long disappeared up ahead and I continued to, one by one, overtake a huge group of schoolchildren. Most of them looked like they were enduring the worst day of their young lives and just wanted to get back to their Gameboys or fidget spinners.

I took a quick glance at the clock. I wasn’t sure exactly what time I started, but I thought that I was in with a shout of getting to the top in under an hour. This realisation gave me another boost of energy, which sadly only lasted around 4 seconds, as the reality of climbing a total of 2,830 steps returned.

The vast majority of the hike is covered by huge trees so when I saw light beaming down towards me I sensed that the end was near. Another couple of minutes and a handful of switchbacks later and I was striding into the late morning sun having completed The Grouse Grind.

Chuck, who had been sitting at the top for sometime informed me that I did it in about 55 minutes which I was delighted with. Well, I would be delighted with it later when I wasn’t feeling so sick and unable to stand.

Unless you’re an absolute maniac, most people only seem to do The Grouse Grind once. It’s a fun challenge and an iconic hike, but it’s not very interesting or scenic. Right next door is the less crowded and more beautiful BCMC Trail which seems to be more popular with locals.

The greatest Grouse Grind maniac of all time managed to finish the course in an insane mark of 25 minutes. That’s an incredible feat but I’m even more impressed by the lunatic who holds the record of 17 Grinds in a single day. He certainly earned himself a few Molson’s that night.

At the summit of Grouse Mountain

There are many things to do at the top of Grouse Mountain, a lot of which I listed above, but I was only interested in one thing. Well, two things actually. Two big things. Bears.

Coola and Grinder are huge grizzly bears who were sadly orphaned at a very young age. They’ve been looked after at the top of Grouse Mountain ever since. They wouldn’t survive if they were returned to the wild, so they live a happy content life in their wildlife refuge at the top of the hill.

We approached the large enclosure with great anticipation. Our journey was intercepted by a lovely lady who told us where we might be able to spot the cuddly giants. We peered into the undergrowth from a safe position behind the electric fence. Just trees, rocks, a pond and some bushes. Where are these bears? Still just trees and rocks, and… hang on a minute, that big rock just moved!

What I assumed to be a huge rock was, in fact, a prostrate Coola’s rear quarters. He raised himself up briefly, only to slump over again. He was having a very lazy afternoon in the sun. Then another rock moved, this time it was Grinder and he wasn’t feeling so lazy. He sat up nice and tall for the rapidly firing cameras in the gallery. 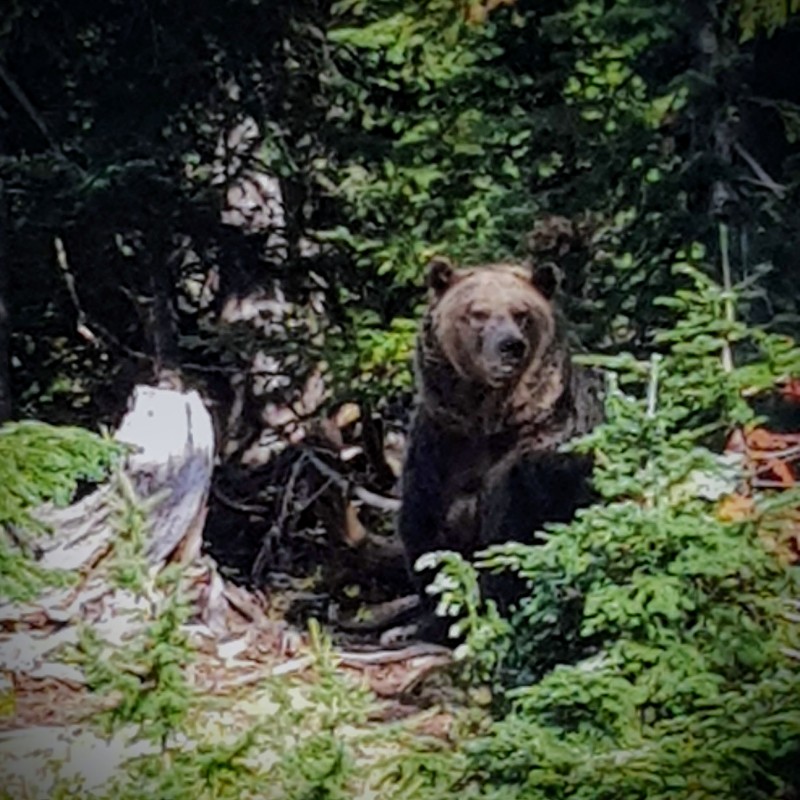 There really is a huge amount going on at Grouse Mountain, on the way to the Skyride we passed a Lumberjack Show which was doing a thoroughly excellent job of entertaining the kids. There are also Birds of Prey demonstrations, all kinds of dining options and even a theatre.

In ordinary circumstances I would have happily walked back down the BCMC track, however, Chuck had an afternoon of rock climbing planned for us so we took the quicker route down by Gondola which afforded great views and wasn’t too expensive. 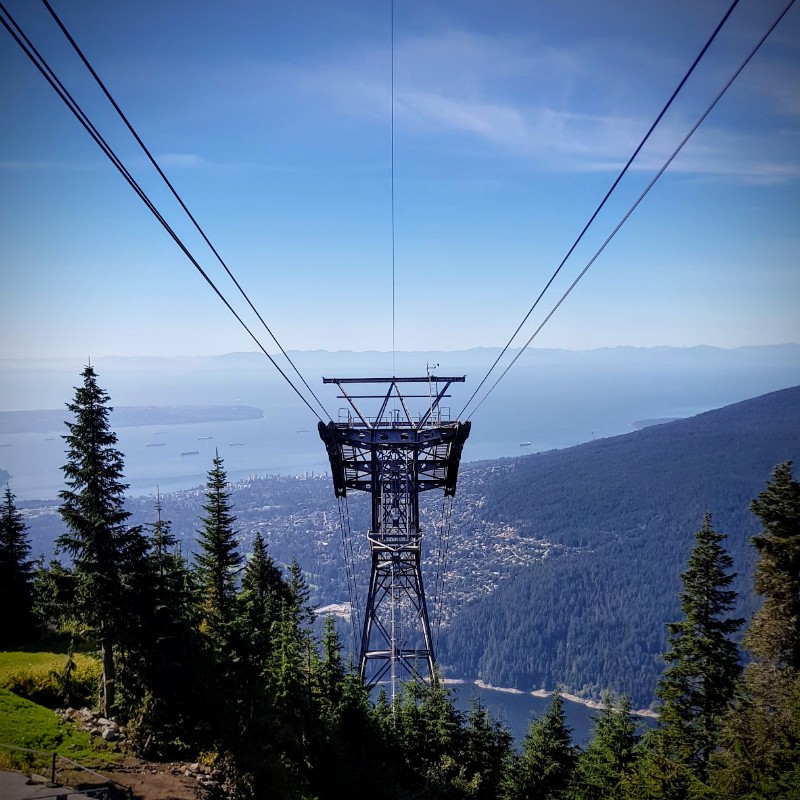 The Capilano Lake, created by the Cleveland Dam, is a lovely spot for a photo.

If you are interested in the local Salmon runs, then The Salmon Hatchery just down the road is a great place to visit. You can see the fish jump up the sections through glass plated walls. Very interesting for the fish enthusiast.

If the Grouse Grind sounds too easy, then I recommend the Elsay Lake trail on Mt Seymour. It’s a spectacular but tough hike. It’s not that commonly trekked, so is a real adventure into the Canadian Backcountry. Add the Elsay Summit Trail for extra marks. Please investigate and prepare thoroughly before setting off, this is not for the faint-hearted.

“This mountaintop playground offers sweeping views of downtown Vancouver shimmering in the water below. In summer, the Skyride Gondola gives access to everything from Lumberjack shows to hiking trails and a grizzly bear refuge. It’s touristy, but with this much fun on offer, who’s complaining? For the best view, ride the elevator up the 20-storey turbine tower to the Eye of the Wind’s panoramic viewing pod; that’ll get your camera itching for action.”

Grouse Mountain is in The Ultimate Travelist Challenge at number 474. As The Book says, it is very touristy, but the history, the location and the unbelievable array of activities make it a really excellent spot. I think it’s a worthy entry and Grouse Mountain’s position at 474 is probably about right.

Have you ever been to Grouse Mountain? Did you do The Grind? If so, what was your time? Let me know in the comments below.

We use cookies to ensure that we give you the best experience on our website. If you continue to use this site we will assume that you are happy with it.Ok