Tofino Trek – How to find the Canso crash site

Come out of the car park and turn right to head south along the Pacific Rim Highway. Walk along the hard shoulder, being careful of oncoming traffic. Start counting the telegraph poles as you walk and turn onto the path just after the 15th pole. Trek through the jungle and marshes, heading towards the coast for the best part of an hour. You’ll find it halfway up the hill. It sounded like directions to a place where X marked the spot but was, in fact, a route to the crash site of a World War 2 bomber.

I was in Tofino, Vancouver Island in Canada and I was going to hunt for this abandoned plane.

Most people choose to drive to the lower car park for Radar Hill, then follow the above instructions. I stupidly decided to run from Tofino as a way to combine fitness and adventure. Somehow I got it into my head that it was only about 6km, so when I checked my progress after about 30 minutes running to see I wasn’t yet half-way I was a little perturbed. I’d done a good amount of distance running this year, but it had been a long time since I’d run this far.

The roadside path was excellent through town and all the way out to the Visitor Centre which is about 8km from the HI Hostel where I started. I arrived at the Radar Hill turn off after about an hour and ten minutes feeling pretty exhausted, but the excitement of the impending trek into the jungle gave me fresh energy.

Directions to the Canso

I stopped by the side of the road and recounted the directions in my head. Come out of the Radar Hill road and turn right to head south. I did this and started counting down the telegraph poles. One, Two, Three, Four… wait, was that Three or Four? I turned round to check, yes it, was Four. Right, concentrate Tunnicliff and don’t get ahead of yourself!

The hard shoulder at this point is virtually non-existent and because I was on the right-hand side of the road, traffic was approaching from directly behind me. I proceeded with the utmost caution and always had a bailout option planned in case a car came along that didn’t see me.

The road curved and it was possible to walk behind the roadside concrete barrier at this point. I felt a lot safer there. Twelve, Thirteen, Fourteen…

Fifteen, right where is this path? The descriptions I’d read inferred that it might be difficult to find but that wasn’t the case for me. It’s now a clearly gravelled trail directly from the road-side. Apparently, there is a small drawing of a plane on this telegraph pole, but the path was so obvious I forgot to even look for it.

I was wearing trainers as they were the most comfortable for running but now I was heading into the jungle I wasn’t sure if my chosen footwear would suffice. I relaxed immediately though as the trail was well kept, covered in gravel and rose steadily up into the forest. 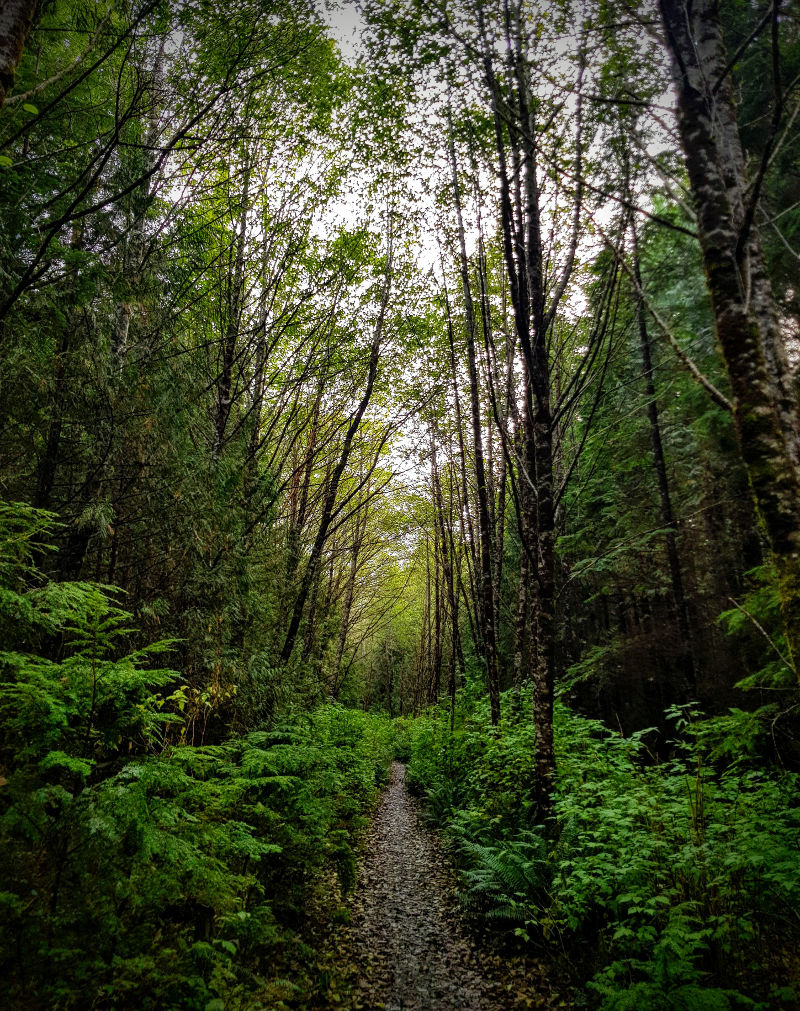 The trees were densely packed and covered in a hanging moss that made me feel like I was walking through an episode of Lost. The comparison in my mind was emboldened by the fact I was heading to a crashed plane in the jungle.

Google maps helpfully have the trail listed and as I approached the end of Google’s demarcation, I came across an old, derelict concrete building. It felt creepy, covered in graffiti and all windows and doors smashed or destroyed. I wasn’t expecting this. 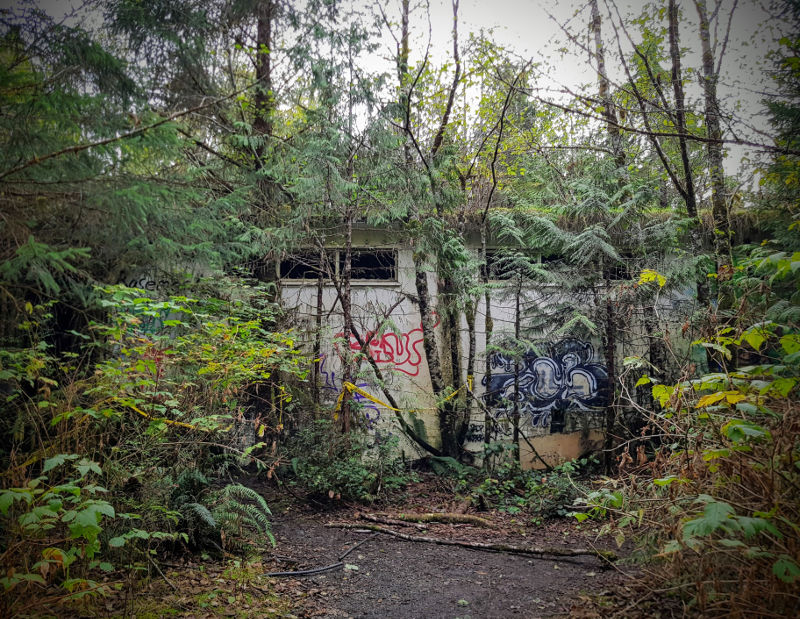 Wandering round to the far side I came across three young, confused looking chaps holding walking poles.
“Hello, are you guys looking for the plane?” I asked.
“Yes, we went down that way but must have taken a wrong turn as we just came back up over there.” Said one, pointing over to his left.
“I wish there were better directions.” Said another.
“OK, well wish me luck.” I said as I departed down the track.
“It’s quite muddy and technical.” came a word of warning.
“OK, thanks.” I said whilst thinking – I’ve got this, don’t you know I hiked all the way to Mt Elsay last week?

The path initially goes downhill fairly rapidly. The footing is reasonable and it was straight-forward, to begin with. At this point I was struggling to see what all the fuss was about, however, the fact that three seemingly intelligent young men couldn’t find a large plane in a jungle when there were trail markers did leave me a little concerned.

Oh yes, there are trail markers. All different colours, but I kept following the blue ones and they didn’t let me down. The first section really is only one path. There is no chance of getting lost, but that changes very quickly once the trail levels out. I was now into bog country and the possibilities were endless.

Huge muddy puddles were spanned by fallen trees. There was the occasional dry path but they were few and far between. It was a natural adventure park and I was in my element trying to figure out the most expedient route across without getting my trainers damp. 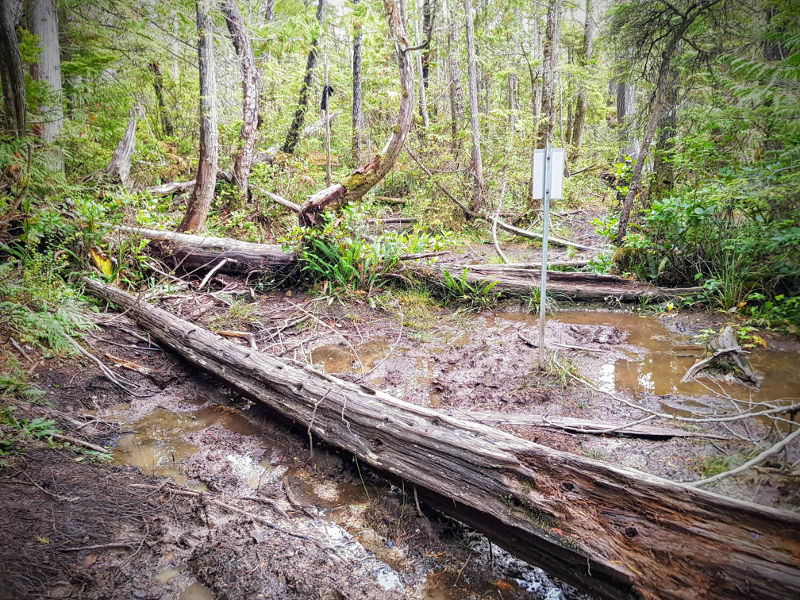 I encountered plenty of people doing likewise and as usual between hikers, there was a common bond and lots of helpful conversation. I liked to stay as low as possible so avoided the tree crossings and risked slightly wet feet in the sodden moss.

The ‘path’ had now become anywhere between 10m and 30m wide and the possible routes along it were potentially in the millions. Certainly, if you’d asked me to retrace my steps for even a small section I’d have said it would be next to impossible.

So, this point is key. When traversing these wide sections, it’s important to remember which general direction you are travelling in. It’s extremely easy to lose track of your bearings and start heading in the wrong direction. Essentially, you just need to keep heading directly towards the coast. There are plenty of trail markers, but because of the huge number of potential routes, they can become confusing.

Keep heading towards the coast.

As much as I enjoyed finding ways across the deep puddles, I found much better progress away from the central area. Making sure I continued to keep an eye on my general direction, I moved across to the side where the paths were dryer and easier to navigate.

Now well past the end of the Google Maps trail, I was beginning to wonder how much further I had to go and whether I’d missed the plane. Would I suddenly break out of the forest onto a beach? It was a while since I’d seen another soul and although I was definitely on the right path – I still had my favourite blue markers in sight – I was hoping that this plane would materialise soon.

Then a dog appeared. Growling. Not ideal, but better than a bear. I said hello to the dog and he became much more friendly. His owners also informed me that I was about 15 minutes from the plane. Excellent news.

I tramped on through a straight-forward section which led to some deep mossy meadows and finally the plane appeared through the foliage. Lampooned on the side of the hill amongst the rocks. The pilot had successfully found the hardest landing spot in several square miles. It crashed there shortly after takeoff in February 1945 and mercifully the 4 depth charges it was carrying remained intact – as did the 12 people onboard. You can read more about the crash and it’s last remaining passenger here.

Remarkably the plane, a Royal Canadian Air Force Canso 11007, is essentially still in one piece and you can clamber up around it and look into it from all angles. Unsurprisingly, it’s been covered in graffiti and people leaving personal messages – both positive and negative. The person who wrote “F*** you, Chris” on the fuselage clearly has a deep-seated vendetta against Chris. I wonder what he did? 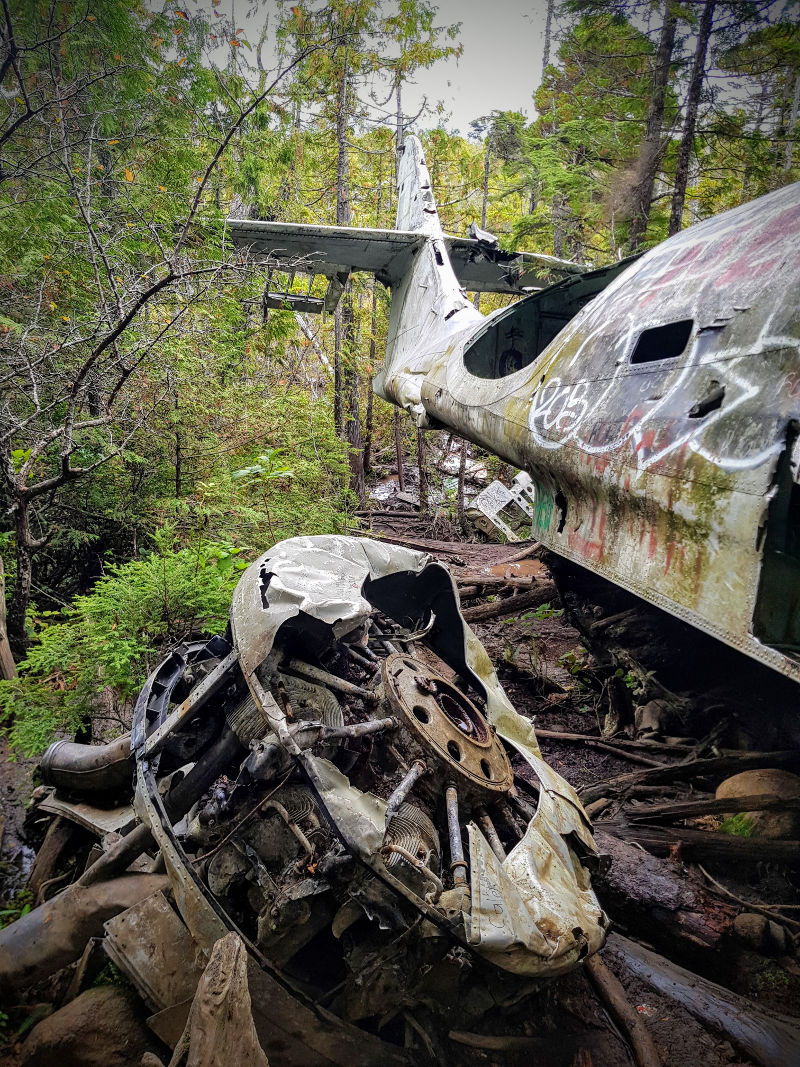 I snapped a few photos and then headed back across the boggy marshes, heading for the highway. I’m not sure whether it was because my skills had improved, or just because the return journey always feels quicker, but it felt like I got back to the derelict building in no time. From there, it was only a short hike down the path and then the small matter of the 12km run home.