What I learnt playing Work Exchange Tinder in Alaska

Sat shivering in a beaten up old truck, icy Alaskan air blowing in through the rust holes waiting for my host to complete a federal drugs test, the question of whether this was what I wanted for #tunnocksworldtour was extremely pressing. The mangy dog at my feet was probably pondering the same dilemma.

Ketchikan, Alaska was my location – ‘Salmon capital of the world’. There was plenty of evidence that this title was merited as I crossed the Tongass Narrows. The silver fish were constantly leaping clear of the water as they frenzied towards their spawning grounds.

I had just flown into Ketchikan Airport following a failed kayaking trip in Angoon and was now on the short ferry ride from Gravina Island over to Ketchikan. A journey which was the subject of much discussion in the late 2000’s as Sarah Palin supported the proposed plan for a $398 million bridge to replace the 15-minute ferry. It was dubbed the ‘Bridge to nowhere’ and the plans were widely discredited amongst accusations of ‘pork barrel spending’. Gravina Island only has about 50 residents. Seems reasonable.

Ketchikan is also the home to the highest Zip Code in the US, a massive 99950.

Phil (name changed), my host, had picked me up from the ferry terminal. I would get accommodation and food in exchange for 4-5hrs labor per day. He needed help fixing up a battered, beaten and derelict old home for him and his family to live in.

We’d made contact via the work exchange placements equivalent of Tinder. I’d swiped right for an authentic Alaskan experience, living and working with locals. Phil had been equally smitten with my ability to turn my hand to anything and a willingness to get stuck in. We were a match and now it was time to get started.

Phil talked me through the unique nature of the task on the short drive to the site. This uniqueness was one of the reasons that I’d swiped right. You see, it wasn’t just one house, it was about five. Also, these houses didn’t have regular foundations. In fact, they didn’t have foundations at all. They were strapped to the top of a massive raft which provided support and flotation. Phil was renovating an Alaskan Float camp.

These floating homesteads were often used to house workers for logging companies. When work shifted to a new area the float camp could be towed into place providing a mobile workforce. Many of these buoyant buildings have now become victims of harsh Alaskan winters but Phil’s had survived. Just. 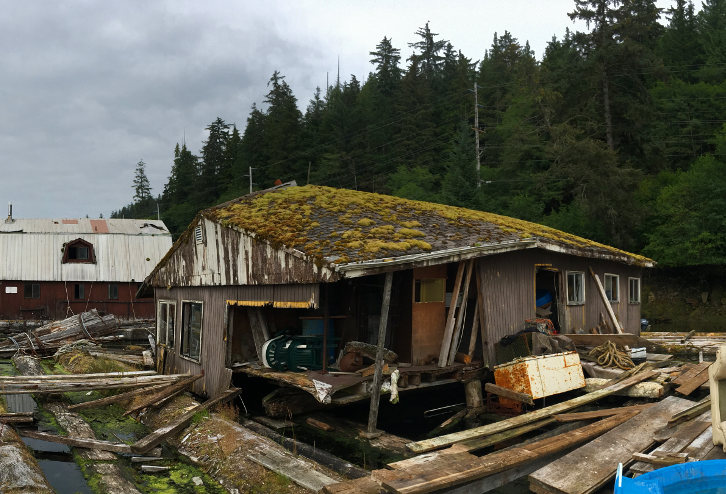 We boarded the main float via a tiny skiff. For someone my size staying balanced once aboard was a serious challenge. I nearly launched myself, Phil and a box of tools into the icy water several times as we manoeuvred across from the bank using a self-made pulley system. My first impressions of the float camp were as follows:

But work here we did. It took some time to figure out which logs moved and which ones didn’t, where the gaps were and most importantly which boards, if stood on, would disappear from under you like a comedy trap door, plunging you into the frigid depths. It sounds stressful but was actually great fun.

After a tour of the site, which took about 2 hours, we settled into rebuilding the floorboards outside the one habitable building. There were plenty of boards to choose from, however, some were rotten, some too thin and some weren’t strong enough. It was like doing a huge jigsaw puzzle except that many of the pieces were unusable. To add to the complexity we ventured out on the boat to collect more jigsaw pieces from an unclaimed raft that had drifted ashore on an island. Loading the 20ft boards on the boat as it crashed around near some rocks was questionable but we got everything, including ourselves, onboard safely.

On the second day, we doubled down on our floor building ability and decided to renovate a floating platform that could be used to ferry large items from the shore or possibly, if extended, as a permanent walkway. The photo below shows the fruits of our extensive labour. It’s hard to believe but this is a massive improvement from its condition at the start of the day. 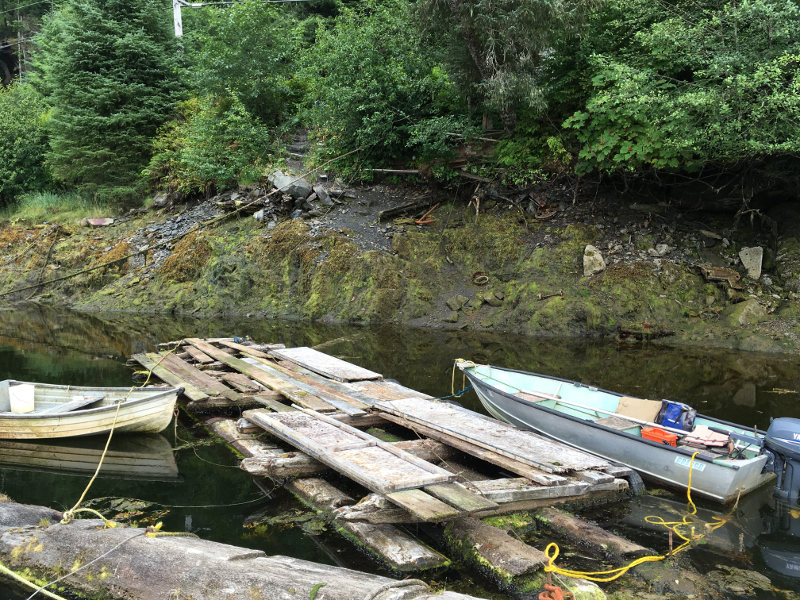 It had been strenuous labour but we made good progress over the first two days and everyone was happy.

Back at Phil’s current house, I met his girlfriend and tiny new baby. We shared stories over evening meals and it was clear that life here was very different to back in the UK. I was asked how we generated power. I explained that we just sign up with an energy company and they provide the electricity or gas through our networks of pipes and cables. This concept seemed alien to Phil. He’s used to generating power in all kinds of different ways himself; solar, wind, hydro, log and oil burners. The remoteness has led people to be far more self-sufficient at The Last Frontier.

As I learned more about Phil’s life, I began to feel more like a therapist rather than a building assistant. He had a lot going on. I won’t go into details but there were various legal, relationship, family and money worries. All this in addition to the aforementioned drugs test which was needed to ensure he would be allowed to care for his new child.

I was starting to have misgivings about this ‘fledgling relationship’.

Time for a break

So, on day three, I gratefully accepted Phil’s proposal that I go kayaking whilst Social Services came to inspect the float camp. A good opportunity for us to ‘have a break’. Just me and a fishing rod in a tiny kayak.

It was much smaller than anything I’d paddled previously taking me at least an hour to feel like capsizing wasn’t a danger with every stroke. I had a marvellous time exploring Alaskan backcountry. Inquisitive, cheeky seals followed me around all day. I didn’t see them at first, they would surface behind me, then submerge when I turned to look. I could sense their presence though and it was a genuine relief when I spotted the first one and realised it wasn’t something sinister stalking me for its supper. 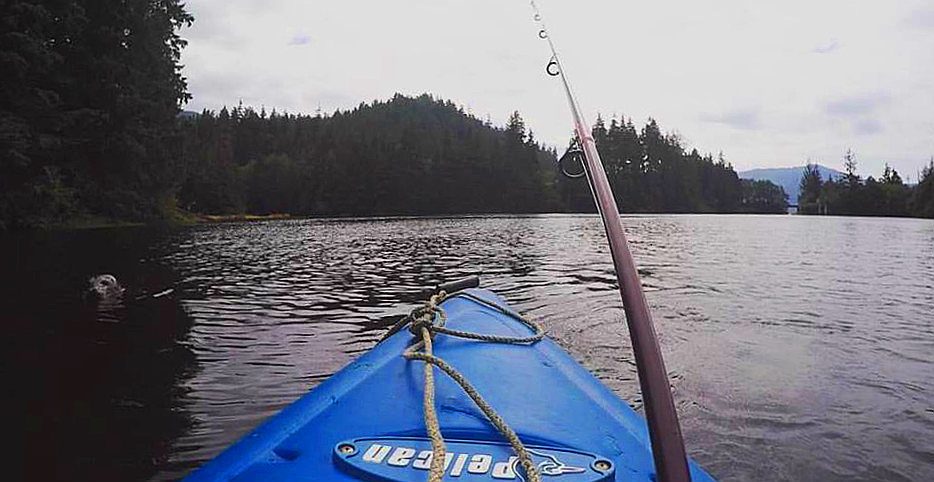 Further on, an extremely impressive Bald Eagle sat on a branch no more than 5 metres away from the bow of my kayak. I was so captivated spotting seals that I floated right up to it without noticing. As I backed away to give it some space it dipped it’s head, took off and flew effortlessly past me across the water. Wow.

I paddled up the creek, away from the seals to find the water crammed full of Salmon. Too many to count. I tried to catch one but they had no interest in feeding. By the time they get this far upriver all they want to do is spawn and then die. Noble creatures. I’m fairly certain if that was me I’d still be interested in a cheese sandwich.

The following day however, was a struggle. Poor Phil seemed very stressed and a lack of focus meant precious little got done. I learned of some money issues that he had and it was clearly all adding up. My attempts to self-start on the renovation weren’t well received and the day ended with the news that Phil’s girlfriend had moved out and taken baby with her. Am I in the middle of an Alaskan soap opera? I checked the house for hidden cameras.

I’m now regretting the fact we went on a ‘second date’ and really wished we hadn’t swapped phone numbers.

Allowing Phil some space to sort out his issues seemed like a good idea so I went for a tough, long hike up in the mountains. This was definitely one of the reasons why I came to Alaska. The air was as fresh as I’d ever breathed and the scenery was epic. I even caught a glimpse of a rare Mountain Goat before it jumped off a cliff. The nimble-footed Bovidae took its chances on a sheer rock face rather than risk me getting any closer.

Ketchikan is a small town of around 8,000 people. However, it’s the 6th largest in Alaska which helps to illustrate its sparse population. The cruise ship industry is big business and I watched in awe as these gargantuan vessels docked. If enough boats are here at the same time, the population of the town can double. They spew their passengers ashore who are enticed to purchase diamonds and tinned salmon by locals who have turned their ‘Alaskan-ness’ up to 11. I have nothing against the cruise ships or the people who frequent them but if I ever took a cruise I think I’d run straight up the nearest mountain when ashore, much like the young Canadian solo traveller I met halfway along my hike. Ketchikan is a very different place when the big boats are in town.

Back at the ranch, we attempted more of the renovation. It wasn’t working. I didn’t have enough experience to work without direction and Phil wasn’t able to provide the leadership I required to be a good assistant. There was frustration on both sides, so we sat down and talked it through. I wanted to stay for a few more days, the local area was amazing and I wanted to see more. So, I suggested I pay rent for the rest of my stay as I sensed Phil could really use the money. Actually, I didn’t sense it, I knew it, as he had told me several times. Fortunately, my accommodation was separate to the main house so we didn’t have the eternally awkward situation of cohabiting after the breakup.

It was over. But we’d parted as friends. Time to get back on ‘Tinder’?

Did this turn out as expected or hoped? Not exactly. I’d wanted this to be mutually beneficial. A genuine, day to day Alaskan experience for me and quantifiable project progress for Phil. I had some extraordinary experiences but I felt bad that the renovation didn’t make greater strides in my presence.

Did I learn anything? Absolutely. I discovered a lot about Alaskan life. It’s rough and ready and pretty tough but the people are incredibly friendly and welcoming. The lack of external influence or support promotes a life of stoicism and self-reliance. I was already aware of the abundant wildlife, but seeing it first hand, in the wild, blew me away. I also learnt a bit about communication and conflict resolution!

Would I do a Work Exchange again? Yes, I would. Without a doubt, however, i’d ask a lot more questions beforehand. We weren’t a good match and with the help of this experience, i’m hopeful that I’d ‘swipe left’ in the future. Timing was also unfortunate on this occasion, there were a lot of pressures on Phil during my stay which certainly didn’t help.

Despite the issues and difficulties, this turned out to be one of my richest travelling experiences. Living and working with an Alaskan family provided incredible insight. Its the type of experience that isn’t obtainable when you drop into town from a cruise ship for a few hours.

Oh, and the sight of that Bald Eagle from my kayak will stay with me forever.