Caernarfon Castle – Did you know we almost had a King Alphonso?

As I surfaced at the top of the magnificent 10-sided Eagle Tower, looking out from a perfect vantage point over the Menai Straits, I was struck by one undeniable truth – Wow, my legs hurt! Caernarfon Castle is a wonderland of turrets, towers and magnificent gates but having now traversed its entirety, I was really wishing I hadn’t climbed Snowdon the day before.

Caernarfon Castle was built in a commanding position overlooking the water in North Wales by Edward I. Ground was broken in 1283 and the castle was topped off between 1323 and 1330 (historians disagree on the exact date) meaning it took anywhere between 40 and 47 years to complete. 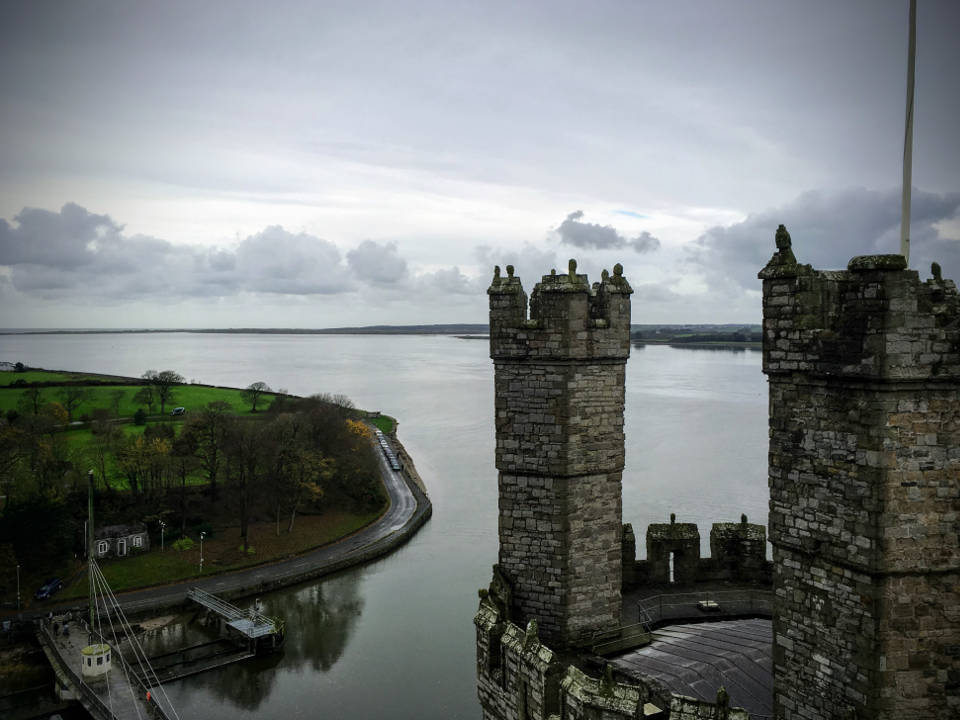 King Edward had recently completed a charge across North Wales and he was clearly keen to put his own stamp on the area, as along with Caernarfon, he also built castles in Conwy and Harlech. However, Caernarfon Castle was the most impressive and he sealed its importance with the birth of his 4th son, Edward who would become the first Prince of Wales and go on to reign England as Edward II.

Edward I and his wife, Eleanor of Castille, who were married as part of a political deal, had a hard time producing an heir to Edward’s thrown. Astonishingly, Edward ‘Prince of Wales’ was their 16th child, only six of which were still alive when he was born and only one of those, Alphonso, was a boy. Alas, Alphonso died a few months later leaving the young Prince as the only heir and England without a future King Alphonso which I think we can all agree is an unmitigated disaster.

I had arrived in Caernarfon on Bonfire Night which was a lovely coincidence. I’m not normally much one for fireworks, it seems like a spectacular waste of money – both figuratively and literally – but there was something special about the show that night. I stood with my back to the domineering, well-lit town walls looking out across the water and it felt as if the whole of Caernarfon had joined me in wrapping up warm for the display. It was a bitterly cold night but as fortune would have it, just on the corner was The Anglesey Arms which was an extremely welcoming pub.

Caernarfon town itself – enclosed by 734 metres of unbroken town walls – is full of character. The walls themselves are in a highly favourable condition and seem to have kept the inside safe from too many modern ‘improvements’. Caernarfon is home to the smallest pub in Wales – Bar Bach. This may have been a fact at one point, but I feel sure there must be smaller ones now it has been extended out the back and into the basement.

Of more interest to me was the Black Boy Inn which was built around 1522 and feels like it. History reeks out of every beam and carefully laid stone. Entering this pub is like transferring to a different dimension. It also has the distinction as being one of the few remaining free houses owned by an independent family business in the United Kingdom.

It was in The Black Boy where I first noticed the high number of native Welsh speakers. Welsh is one of those languages which is impossible to decipher as a non-speaker but it’s a joy to listen to. I was almost being lulled into a trance, enjoying the flowing prose, when someone injected a sentence with “Britain’s Got Talent”. The sudden detection of something I recognised snapped me back to real life and I chuckled as it reminded me of a sketch from The Fast Show.

The day of my castle visit had arrived. I enjoyed a splendid breakfast at Totters Hostel, which I had almost entirely to myself – there is something to be said for travelling out of season – before taking the short walk to Caernarfon Castle.

King Edward wanted Caernarfon Castle to be a statement of his dominance in the area and it’s fair to say his wish was delivered. The banded walls – using different coloured stones – are reminiscent of Constantinople and it’s possible that this nod to the Roman Empire was intended to show strength. It was certainly an imposing sight as I entered through the monstrous King’s Gate.

Caernarfon Castle has been lovingly restored and is kept in excellent condition. The entrance price I paid of £9.50 appears to be going to good use. 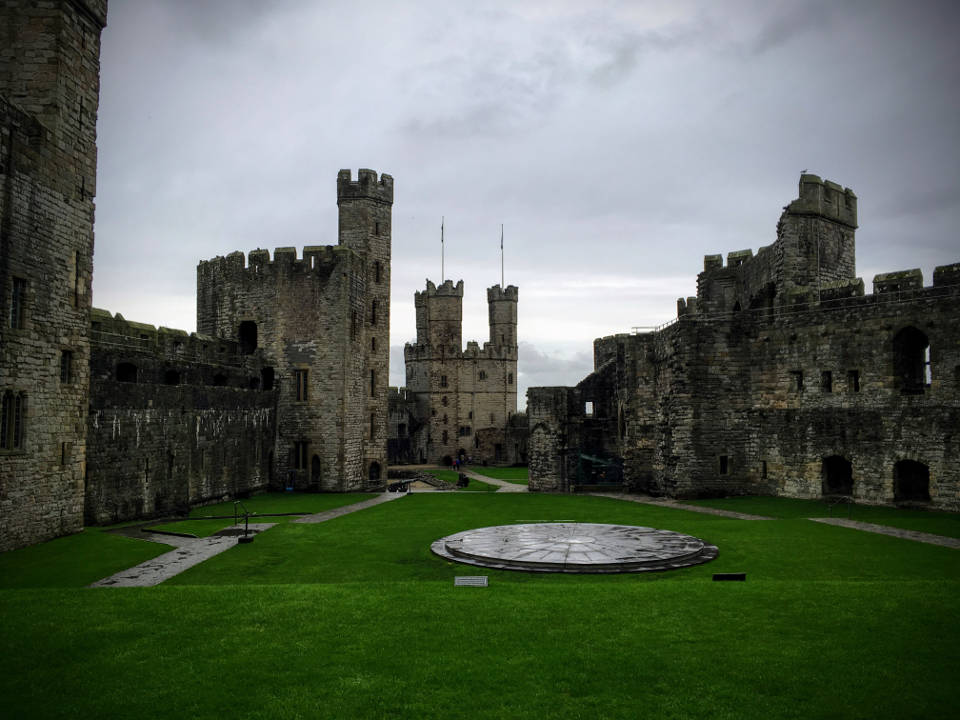 Once inside, if anything, the castle feels even bigger with the huge polygonal towers surrounding the inner courtyard. The shape of these towers is unique in Edwardian castles providing another indication of how important this site was deemed by King Edward. The three smaller turrets sprouting out of the Eagle Tower are the type that must have inspired many a Disney animator. 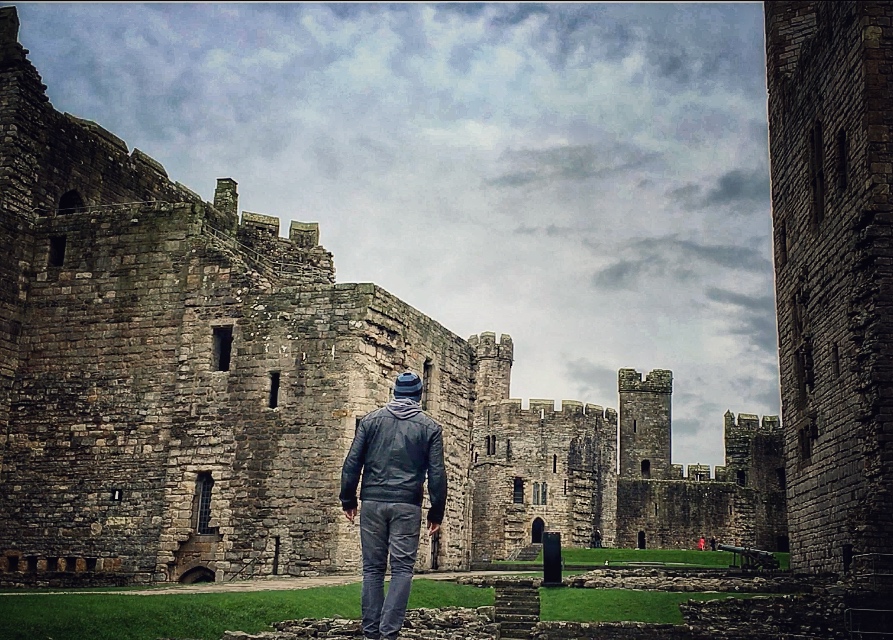 I turned left after entering and made my way through the narrow corridors exploring every nook and cranny. Peering out of arrow slits I tried to imagine what life would have been like here in the 13th Century. I certainly don’t think I would have been an archer as I couldn’t get my oversized cranium far enough into the apertures to be able to sight potential targets.

I climbed the first tower and looked between the battlements over Caernarfon town. My targets would certainly be visible from here but I was concerned, as large as the battlements were, they still probably didn’t provide ample cover for my giant swede. My job would have been in the Kings Gate, surrounded by thick walls, dropping large stones on the few attackers to make it that far.

The Queens Gate at Caernarfon Castle

I abandoned my murderous thoughts, descended the tower and continued around until I reached the Queens Gate. Smaller than its male counterpart, this opening provided direct access outside the town walls, although you’d have to be a rock climber as the stone path that led up to it has long since been removed. It was here in 1969, following his investiture as Prince of Wales that Prince Charles was paraded in front of the Welsh people. 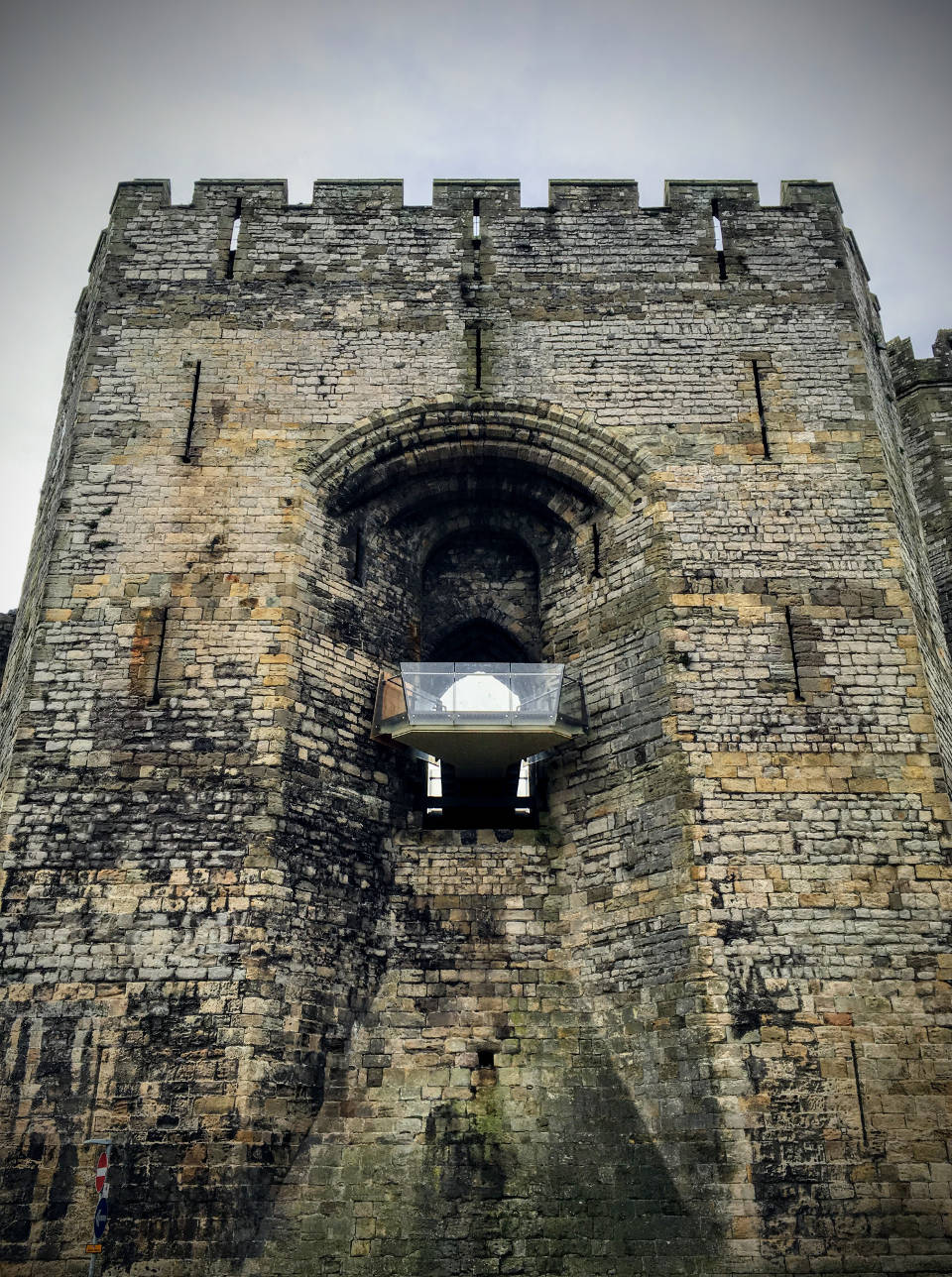 I continued my exploration of the corridors, parapets and towers before coming across the Royal Welch Fusiliers Museum housed in the Queens Tower. This added bonus, which is free one you’ve paid entry to the castle, has an abundant collection of models, displays, clothing and paraphernalia which tells the story of the 300 years of service by Wales’ oldest infantry regiment. The extensive wall of medals was a personal highlight.

The Eagle Tower at Caernarfon Castle

All that remained was Eagle Tower. I’d summited all the other turrets but Eagle Tower was the tallest. My legs were sore but I persevered up the narrowing stairway, squeezing my large frame through tiny openings until I popped out onto the rooftop like a blob of toothpaste from a tube.

Don’t climb Snowdon the day before visiting Caernarfon Castle if you want to enjoy exploring to the top of every tower.

I stopped to stretch the cramp in my right calf before standing erect to look out from this most westerly point of Caernarfon Castle. Anglesey sat comfortably beyond the flat, calm Menai Straights to the North-West and the rolling Snowdonia National Park reared its mountainous peaks behind the town to the South-East.

It really is a magnificent spot and I soaked it all in for some time as various people appeared from the stairway. One by one they steadied themselves, waited for their elevated pulses to return to normal before looking around and finally descending back down.

The peak, whether it be the crest of a mountain, the highest point in a castle or atop a Mayan ruin in Central America is always the ultimate solace for me. When there is nowhere further to climb and the goal is complete, then your mind can really be free.

Plus, my legs were still too tired to even consider going down yet!

This corner of North Wales is full of things to do. The following day I took a trip to Llandudno to enjoy the town and the views from Great Orme. I also enjoyed days out in Snowdonia National Park and Portmeirion.


“When majestic Caernarfon Castle was erected between 1283 and 1330, its design and scale were quite unlike those of any other royal stronghold of its time. In fact, they were quite extraordinary, inspired by the dream of Macsen Wledig recounted in the Mabinogion (a literary work of medieval Celtic mythology), Caernarfon echoes the 5th-century walls of Constantinople, with colour-banded masonry and polygonal towers, instead of the traditional round towers and turrets. Despite its fairy-tale aspect, this military stronghold, seat of government and royal palace of Edward I is thoroughly fortified; it resisted three sieges during the English Civil War before surrender to Cromwell’s army in 1646. These days, it’s still relatively intact and you can walk on and through the interconnected walls and towers, imagining the bloody battles and once took place here.”

Caernarfon Castle is in The Ultimate Travelist Challenge at number 315. Its unique features, historical importance and striking appearance in a terrific location make it a worthy entry. Have you ever been to Caernarfon Castle? Do you agree with my summary? Which other castles are better? Let me know in the comments below.