Discover the many fascinating sides of Portmeirion Village

Portmeirion is many, many things. It’s a personal crusade. It’s a sought-after filming location. It’s an architectural masterpiece. It’s a natural wonderland. It’s a home. It’s a tourist attraction. It’s a collection of Mediterranean inspired buildings on Wales’ west coast. But most of all, I think, it’s a curiosity.

The Architect – Sir Clough Williams-Ellis – made Portmeirion his personal masterpiece. His passion in life was designing architecture that would enhance a location, not detract from its natural aesthetic. It was with this in mind that he purchased the stunning site of Aber Iâ estate near Penrhyndeudraeth. An area with steep cliffs, sandy bays, woods and some decrepit old buildings; Williams-Ellis saw huge potential. 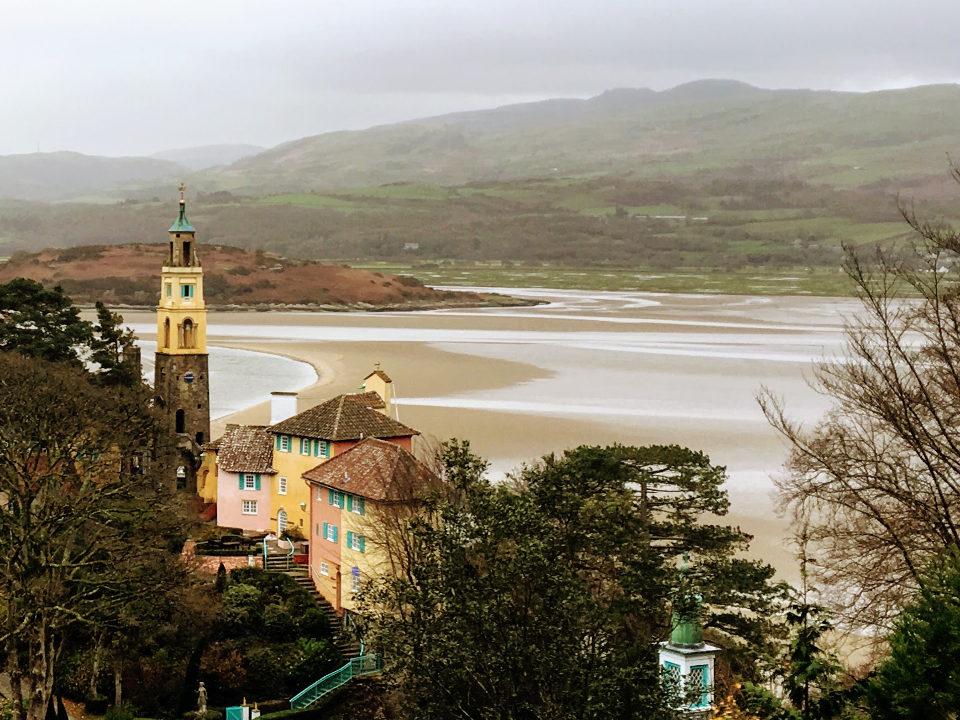 Turning the site, an area of spectacular natural beauty, into the Portmeirion we know today was a 50-year project of passion for the former military man. Adding thoughtful, sympathetically designed buildings to the grounds slowly and purposefully has created a small township of lovely constructions, enticing viewpoints and glorious gardens. Every turn seems to supply a fresh vista or an interesting sight.

There is a distinctly Italian Riviera style, a central piazza, bright colour-washed buildings with loggias and porticoes aplenty. There are two hotels, various guest cottages, a Town Hall along with the tiniest Fire Station I have ever seen. This doorway is roughly 4ft tall! 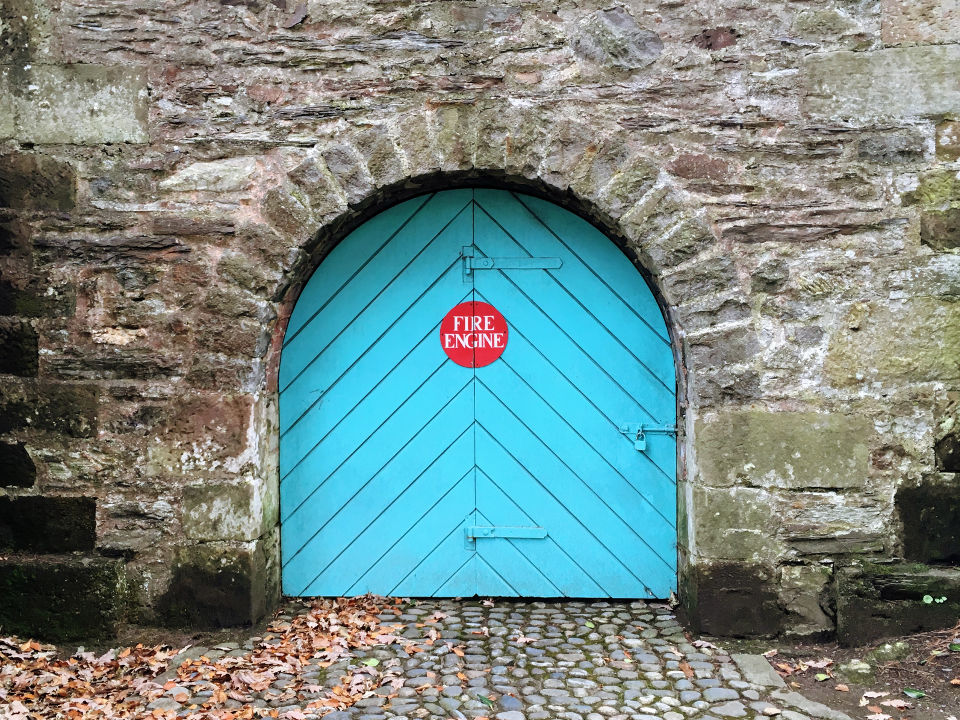 Away from the village centre, the Portmeirion Gardens offer plentiful areas of interest. Amidst the subtropical forest can be found some of Britain’s largest trees and rarest flowers. There is an extensive Japanese Garden including temples, pagodas and idyllic ponds. I visited in November which is wildly out-of-season for most of the plants but the walk through the well-kept grounds was enjoyable none the less. 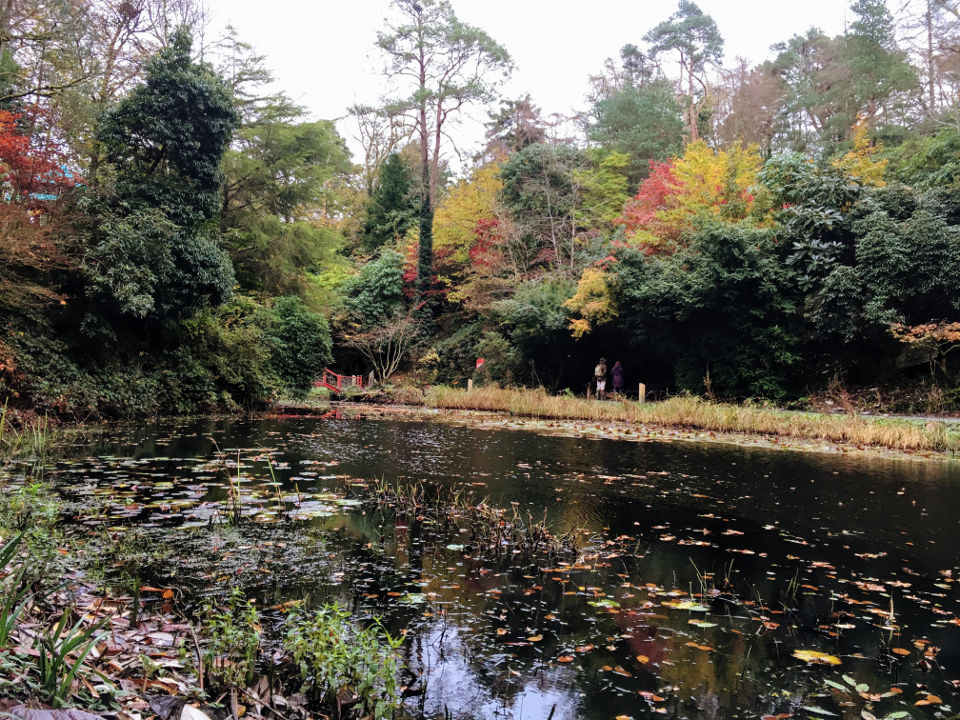 Further afield, down some smaller tracks is the Dog Cemetery; home to the doggy remains of all the pet canines that have lived at Portmeirion over the years. The first gravestone I saw was for a dog named Trixie which coincidentally is the same name as the only dog I’ve ever owned. Most of the graves were marked with typical tombstones of various sizes, however, one former resident was worthy of much more as this stoic wooden carving would attest to. 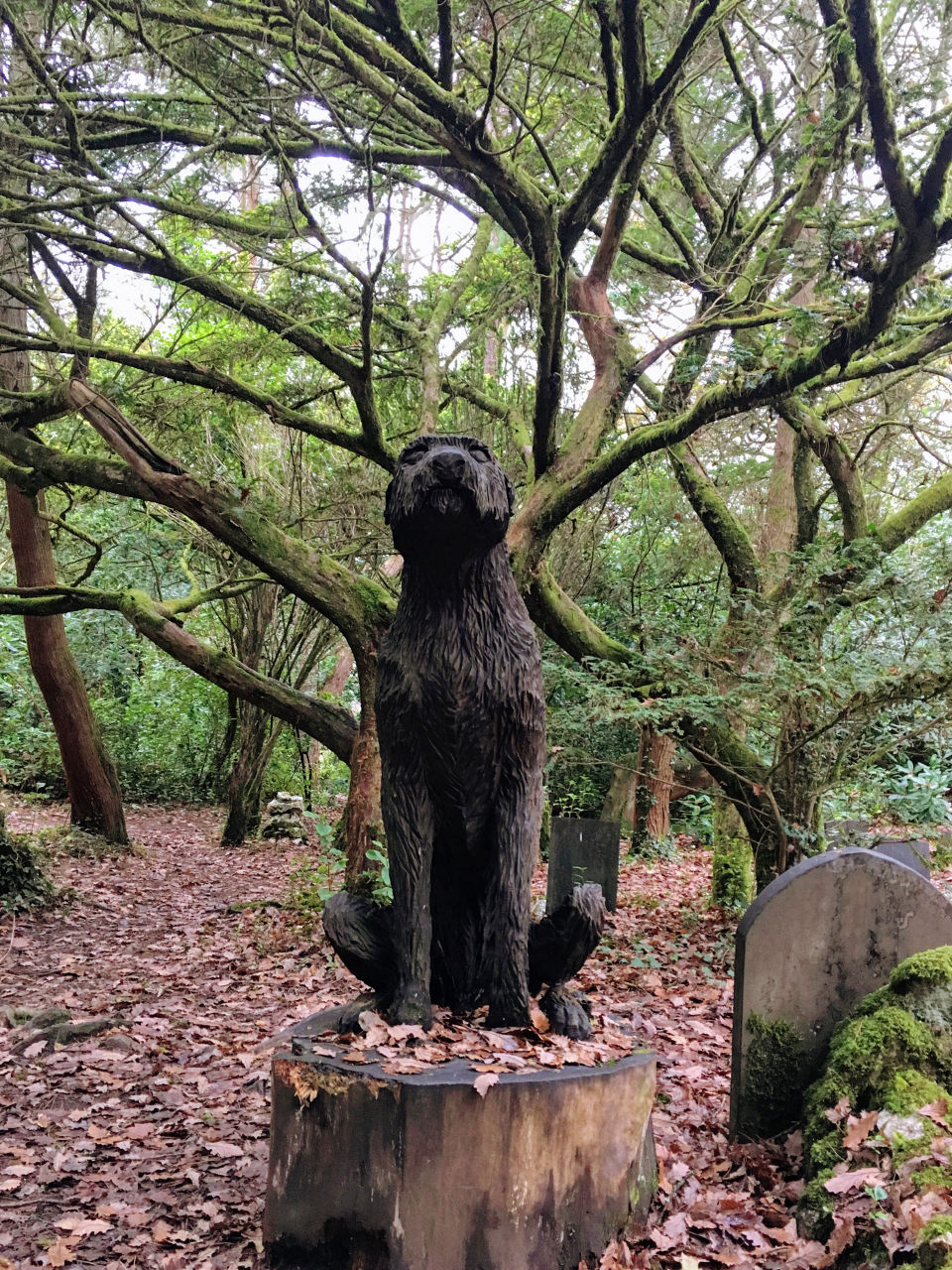 Quite a bit further on along deteriorating trails was the Ghost Garden. I’m not a believer in ghostly things, so it came as no surprise when I didn’t feel the least bit scared. It turns out Williams-Ellis probably wasn’t a believer either as the name was given to signify the discovery of lost grounds from an old ferry cottage. There are plenty of exotic plants here though if you can manage the walk. 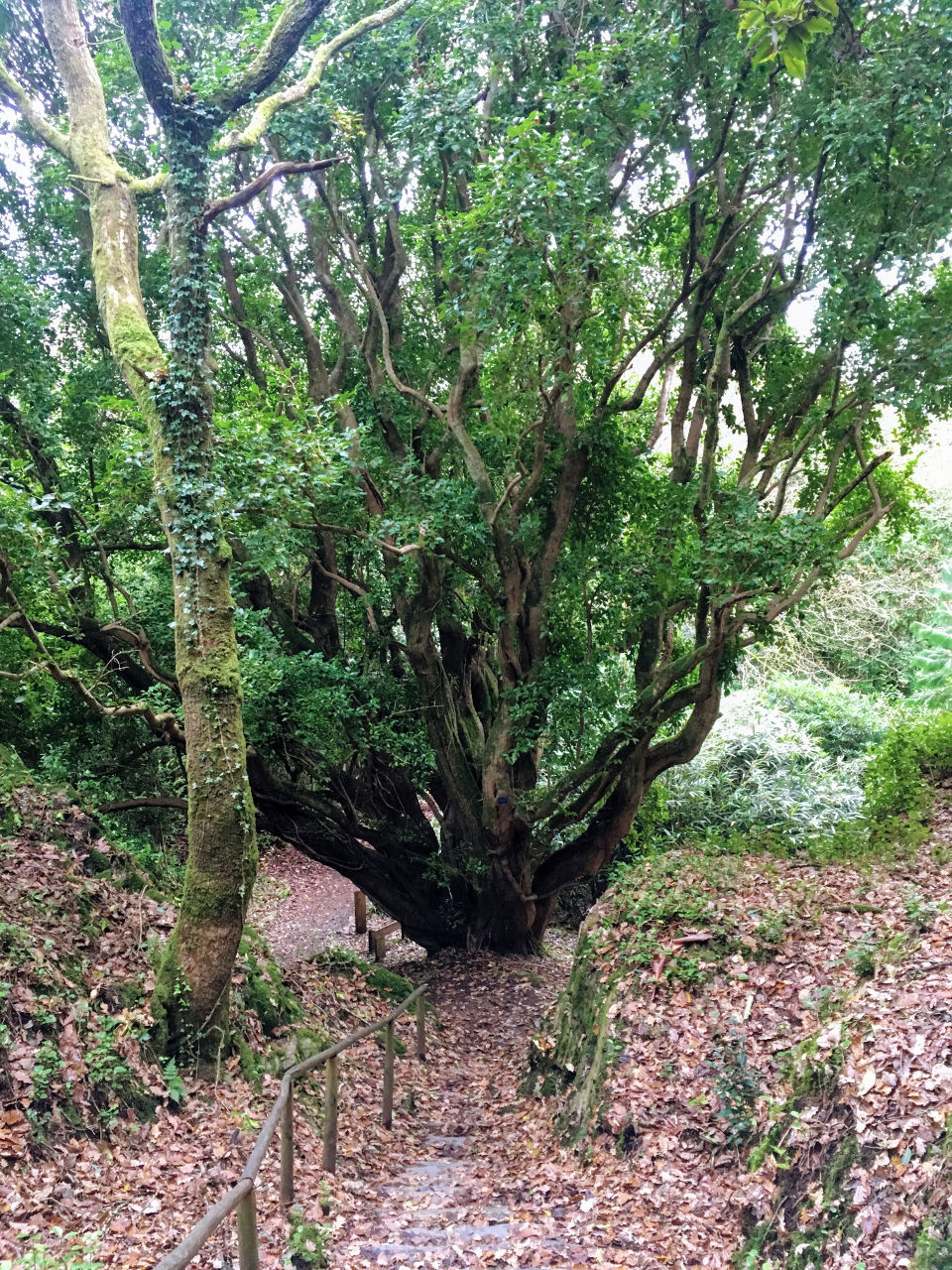 At the far end of the grounds beyond the Ghost Garden are the wild views of Afon Dwyryd which runs out to sea through a bay of sandbars and slate. The beach below the cliffs is blessed with white sand and ranks as one of Britain’s best.

Portmeirion is probably most famous as the filming location of The Prisoner – a cult British TV show from the late 1960’s. The show is about a former British secret agent who abruptly resigned from his job then was captured and imprisoned. It had a huge influence on science fiction and fantasy programs. This clip, showing ‘Rover’ – a mysterious white ball with super-human powers, is an example of how weird British TV was.

Siouxsie and the Banshees also filmed the video for their cover of The Passenger here, although frankly, there are so many close-ups of the emphatically 80’s band that they probably could have recorded it anywhere. Watch out for Rover at the end, a cultural nod to the influence of The Prisoner.

Another band to record a video at Portmeirion were Supergrass for their 1995 summer teen anthem, Alright. This video also has a host of references to The Prisoner as Gaz Coombes and pals ride around the village and nearby streets and beaches on a floating bed. Rover makes another brief return here too!

If you want to explore the entire site and visit all the buildings at a leisurely pace then you could easily spend a full day here. With the hotels and guest cottages, I think it would also be a great place for a long weekend. The food options on site are excellent. I had the Fennel Risotto with Pan-fried Sea Bass at the Caffi Glas and it was fantastic on a cold day.

Portmeirion is nestled next to Snowdonia National Park and Cardigan Bay. It’s a relatively remote part of the UK so I decided to drive there to allow the flexibility to visit plenty of other great places (Caernarfon Castle, Snowdon) over a long weekend. I stayed in Caernarfon at the very homely Totters Independent Hostel which I highly recommend. If you don’t have access to a car then there are some public transport options available. Or, alternatively, Portmeirion does have its own Heliport for private Helicopter flights!

Buy your tickets online to save up to 10% of your entry fee!

When I visited in 2017, the opening times were 9:30am to 7:30pm year round and the cost of entry was £12 which I think was a reasonable charge to explore the architectural and natural excellence on site. As always, please check these details yourself before travelling, this is just here as a guide and is subject to change.

If you do make the trip to Portmeirion, watch out for Rover!

What else is around?

If you have a spare couple of hours, then 40 miles north, near Abergwyngregyn are the spectacular Aber Falls. The walk to the falls is about a mile through some beautiful countryside and the falls are high and mighty. Well worth the effort! Here are 10 more active things to do in Snowdonia.


“If you’ve ever seen 1960s TV series The Prisoner, you might find yourself looking out for giant bouncing balls as you explore Portmeirion, where the cult show was filmed. Its colourful Italiante buildings were created by Welsh architect Clough Williams-Ellis, who believed that beauty is a necessity. This was also once home to the Portmeirion pottery factory, producer of florid tableware. It’s all rather captivating and slightly odd – it could only be in Britain.”

Portmeirion Village appears in the Ultimate Travelist Challenge at number 207. It has a lot of character, but it still feels like a bit of an oddity. I enjoyed my day here and I think it does deserve to be in the Top 500 but I’d rank it lower than 207.

Have you been to Portmeirion Village? Do your experiences match mine or do you think it should be higher or lower? Do you think it is rightly in the Ultimate Travelists Top 500? Would love to hear your thoughts in the comments below.