How to find the party on Anjuna Beach

Anjuna Beach in Goa, India is a Psy Trance fuelled party paradise. However, online event information is sparse and planned parties can change at late notice. So, if you arrive late in Anjuna, you’ll need to find out where the action is fast – fortunately, there is one fail-safe method. Read on to find out how.

Goa is India’s premier beach destination and is home to yoga retreats, water sports and a vibrant party scene. Oh, and cows. Lots of cows. Each of its 50+ beaches has a unique atmosphere, clientele and main purpose. The primary focus of Anjuna Beach is to host Psy Trance Beach Parties. Revellers get a little bit wonky then dance under UV lights into the tiny hours before sleeping it off and doing it all again the following night.

The journey to Anjuna Beach

The well-trodden path to Goa is from Mumbai which is the largest nearby travel hub. Mumbai is a huge, sweltering, hectic and generally dirty and decrepit city. All the travellers I spoke to in Mumbai were looking forward to getting down to the coast to enjoy sun, sand and all-night parties.

I spent my final morning in Mumbai checking online for where the parties would be on my arrival in Goa. Unfortunately, information was limited and difficult to understand without knowing the local landscape. This isn’t uncommon and I figured it would all become evident on arrival.

The bus or train journey down from Mumbai can be a long, laborious and draining experience. So I’m told. I was short on time, so I opted to fly, at a very reasonable price, with one of India’s domestic airlines. Either way, when you get to Goa you’ll need a taxi or tuk-tuk as Anjuna Beach isn’t close to any of the main stations.

Finding the party in Anjuna Beach

A stroll through the dusty streets, flanked by stalls selling such classy items as “If you’re hot, I’m single” t-shirts, revealed plenty of bill posters on trees and telegraph poles advertising club nights and beach parties. Alas, most of these were out of date, some of them comically so.

Hostel staff members are usually great sources of information but again, details seemed patchy. Due to a few recent events, I was told that all the big gatherings had been moved to the daytime. There’s always a night party on though, I was assured.

The answer was on the beach itself. Whilst enjoying a post-dinner warm-up beer the first lady arrived and started setting up. First a table, then a light on a stick. Hmmm, what was going on here? I’d met a pal of mine and we were sitting outside UV Bar, which was being thoroughly beaten in luminance by its next-door neighbour. Then another lady turned up and too placed her table and light on a stick.

We ordered another beer and watched as the tables were adorned with a gas burner, stacks of eggs, bread rolls and various other items of basic kitchen-ware. Then more people turned up, all with the same setup as the two initial ladies. It turns out that the single most informed people on Anjuna Beach are the locals who make the late-night beach snacks for the party revellers. 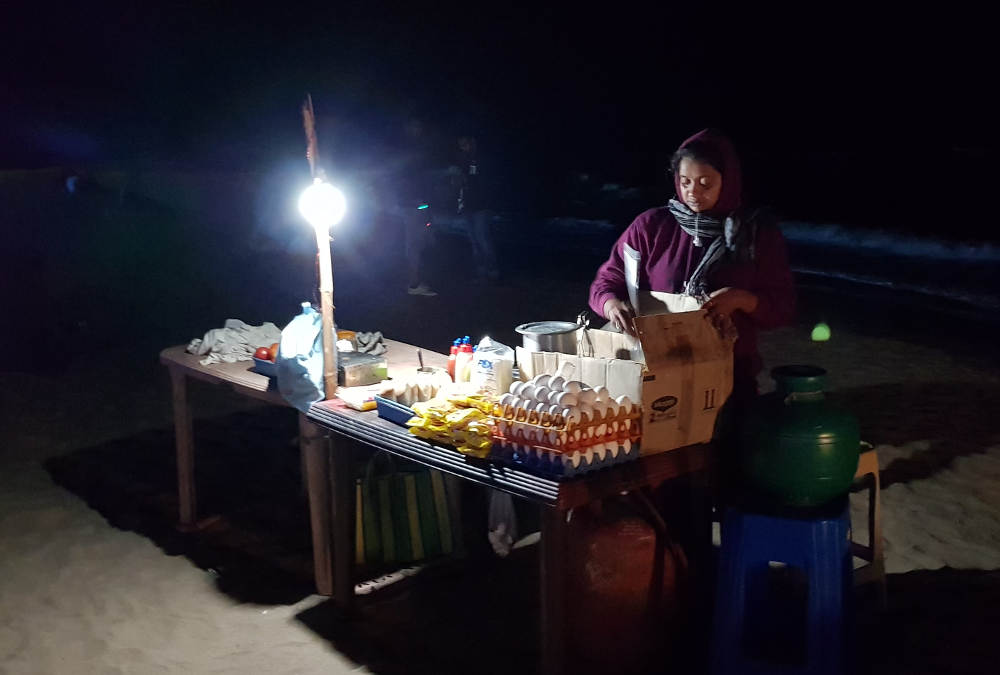 UV Bar went on to host a well attended night. Hungry party-goers took a break from the dancefloor to gorge themselves on freshly made egg rolls and noodles.

As our time on Anjuna Beach progressed we realised that these ‘egg ladies’ were always on the money. Wherever they set up was where the biggest party on the beach was due to be. Local information is always best and it proved to be the case on Anjuna Beach.

So, if you turn up to Anjuna Beach, tired from your long journey and not quite sure where to go, look for the heroes with a gas burner, eggs and soft, fluffy baps. They’re never wrong!

Where is your favourite party spot in Goa?